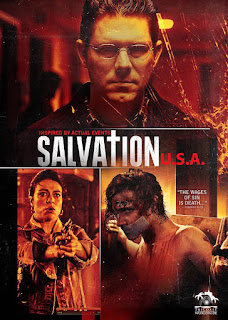 Written by Bernie Van De Yacht and directed by Yacht and Brett Donowho, Salvation, USA is a thriller, sort of. It reminded me a lot of a Lifetime movie with a little sex and swearing. Until the finale, which gets all sorts of batshit violent and bloody. Ah, but advertising, eh? If you watch this movie after having seen the poster, you’ll end up wondering when the hell you’re going to see some violence, as violence is most clearly implied by the thing. And if you haven’t seen the poster, you’ll watch Salvation, USA and suddenly get weirded out when a pretty basic drama gets really freakin’ bloody by the end.

The movie concerns Vinnie (Ryan Donowho), a guy who seems passionate about fixing old stoves, restoring them to their former pristine states. But it’s all a ruse. Fixing the stoves is his launchpad for a long con. Donowho is a very charming actor, and so it’s not hard for the audience to be pretty damn hypnotized by his performance. We want to believe there’s good inside the guy. And there very well might be, but it’s well hidden. The other main characters include Marlena (Giovanna Zacarias), one of Vinnie’s victims, and a couple making a fresh start in the same small Kansas town where Vinnie seeks his own sanctuary.  David Helms (Brett Donowho) is a preacher with a dark past whose marriage to Carla (Angel McCord), is troubled on several levels, not the least of which is his literalist interpretation of the Bible and the macho misogyny that comes with it.

A good enough premise, but the execution is lackluster as hell. The only character of any note is Vinnie, who barely counts as well rounded. Still, Ryan Donowho’s passion for bringing his character to life is evident and it makes for a very watchable character study, if nothing else.

The story is as predictable as it is silly. A slow reveal that the preacher is just as bad, if not worse than the con-artist and is in fact a type of con-artist himself? Yeah, we’ve seen that a few times, eh? The whole revenge scenario at the end of the movie hinges on David’s fragile masculinity and fear of being cuckolded. There’s an interesting movie somewhere in this mess that explores the alt-right’s fragile masculinity and the anger that pours out as a result of their perceived loss of control and power, and Salvation, USA dances pretty close to this idea, but in an unconvincing manner. I think the idea was to make David’s change from a nice guy to a revenge-seeking bloodthirsty maniac a bit more subtle, but what kind of intelligent person doesn’t get that the Christian right is a dangerous, violent, repressed bunch of brutes by now? Every thinking person gets this.

By the time we get to the bloody and actually pretty shocking ending, we do get a pretty interesting twist on the fascist revenge fantasy trope so popular in the 70’s and 80’s: the lone vigilante violently carving up the criminal in the name of “justice.” But the movie is so uninspired that by that point it has lost its audience and the message is lost.
Labels: movie reviews movies