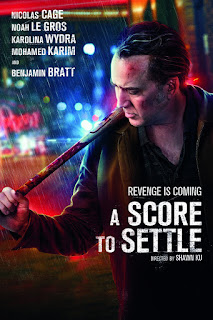 Nicolas Cage going crazy and murdering a bunch of people is kind of its own genre nowadays, and it’s one of the reasons I can bare living in this weird dystopian timeline of ours. Usually, if nothing else, it’s an entertaining experience, and sometimes we get an undeniable masterpiece like last year’s Mandy. Released early last month, A Score to Settle is no Mandy, but it does try, and it certainly has its moments.

Written by John Stuart Newman and directed by Shawn Ku, A Score to Settle is an overlong action-drama with more than a little too much emphasis on the drama.

The story follows Nic Cage’s Frank, a mob enforcer who took the fall for his boss in exchange for almost half a million dollars. He was only supposed to spend about six years in prison, but, as these things go, he got a life sentence instead. Though when we first meet him, he’s being released for medical reasons. He has fatal sporadic insomnia -- a disease where you basically don’t sleep and go into an extended delirium until you just fucking die. In the short time he has left as a free man, he’s going to try to reconnect with his son and also get a bit of violent revenge against those who set him up in the first place.

Newman and Ku are definitely going for a meditative vibe with this one. They really, really wanted to make an arthouse / exploitation film. But it doesn’t really work. The writing just isn’t there to support the tone. It all comes off as very contrived, very self-consciously precious. The movie would probably actually have worked a lot better if they’d leaned more into the more pulpy, grindhouse elements. Instead, it’s like a Lifetime movie with more blood and a bit of swearing. In fact, Ku shoots the thing almost as if it’s a made-for-TV movie. It’s competently shot, but quite antiseptic.

The story does have a few genuinely touching moments, like when Frank is in a taxi with his son Joey (Noah Le Gros), fresh out of prison and enjoying the wind blowing on his face for the first time. It’s one of the few moments where I actually felt something like sympathy for the guy. Everything else -- especially his attempts to connect emotionally with a prostitute more than half his age -- just comes off as artificial and emotionally manipulative.

There’s some cool editing during the scenes where Frank is freaking out in one of his deliriums and the past, present, and future collide all at once, a shallow depth of field emphasizing just how internal a struggle this is for him. We get a real sense of his emotional turmoil, and the limited amount of time he has on the planet to, uh, settle the score.

Cage is Cage in this one. He’s not exactly phoning it in, but this isn’t his most involved performance, either. Karolina Wydra is quite charming, though it’s too bad her prostitute character is only there to make Frank feel good about himself and redeem his character just a little bit. Frank’s final encounter with her is overwrought and cringy.

Luckily, the ending goes off the rails, and we finally get a bit of action. There’s some pretty crazy stuff, but it still manages to disappoint. Someone does get their cock shot off, so at least there’s that. And, oh god, that frustratingly schmaltzy “twist” just before Frank goes on his final killing spree will have most viewers rolling their eyes.

Really, though, none of this would have been so bad had the film been 90 minutes or so. As it stands, two hours is too long for this kind of thing. So much exposition! There’s even an exposition dump where a bad guy explains why he turned on Frank JUST AFTER THE GUY HAD BEEN SHOT IN THE LEG.  Because getting shot doesn’t hurt that bad, right? Right?

There was definitely an effort being put into this thing, and I really don’t feel like Ku was just doing this to make a quick buck or something. A Score to Settle just doesn’t live up to its potential. And that’s okay. The movie is very dumb and a little boring, but it’s weird enough to possibly keep things interesting for the, uh, discerning audience member. Everyone else should probably pick something else.
Labels: action movies cult movies nicolas cage