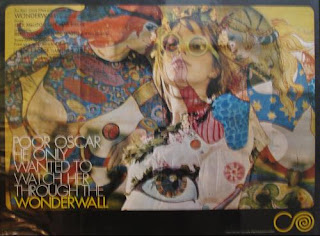 Written by Guillermo Cabrera Infante from a story by Gérard Brach and directed by Joe Massot, the 1968 film Wonderwall is about as psychedelic as it gets. Released a year after the Beatles’ Magical Mystery Tour film and using George Harrison as a composer, the movie wears its psychedelic credentials on its sleeve. A closeup of cells under a microscope in various Day-Glo colors sets the tone from the beginning. Soon after, we’re introduced to Jack MacGowran’s affable, bumbling scientist, the film’s protagonist.


You’d be forgiven if, like me, you roll your eyes at the choice of a scientist as a sort of avatar for the establishment, but, like me, you might be pleasantly surprised to learn that the objects of the scientist’s fascination, those people on the other side of his apartment that he can see through a hole in his wall, are actually drugged out dolts that really have no clue what they’re doing. But that revelation doesn’t come until we’re nearing the end and at first you might be screaming at the scientist through your TV that his curiosity is grossly misguided. “Expanding consciousness” is great, but the discoveries that come from science are much more important. Luckily, this is the message, but it’s a long time coming. First, the professor, that charming and affable sod is so unhip. He wants to be like the cool kids next door and pines over a beautiful, hip fashion model who seems to be the very embodiment of class and grace. MacGowran, a classically trained actor, deftly turns what was clearly written as a very one dimensional comic character into something resembling a real human being. He’s got a kind of rubbery quality about him, which made me wonder if his performance was perhaps an influence on Rowan Atkinson’s Mr. Bean character.


After the tone is set by footage of psychedelic cells underneath the scientist’s microscope, we go to his apartment, where, disturbed by the noise of music from the apartment next door, he throws a glass display of moth specimens at the wall. Not only does this create the hole in the wall from which the scientist first sees the naked model played by Jane Birkin that does strange things to his imagination, but the dead moths come to life, animated in colorful Disney-style cartoons. So, yeah, we know from there that we’re in for the kind of freewheeling experimentation that we’ve since come to associate with psychedelic films.


And no wonder the scientist falls instantly in love with the entrancing Jane Birkin. She typifies the kind of fragile strength men associated with someone liberated back then. Now we realize that this was still the projection of a male ideal, a virginal yet sensual woman who is both frail and tough at the same time. Birkin was good at this type, as is her daughter, the great Charlotte Gainsbourg, especially in the films of Lars von Trier. Director Joe Massot seems to be aware of these contradictions, however, as several times he photographs Birkin dancing with another model using nothing but closeups and medium shots of their legs, only tilting the camera to their faces once, and very briefly. Add to that the fact that Birkin’s character doesn’t have a line of dialogue and her photographer boyfriend is often seen talking about her and you get a strong sense that Massot was saying that the treatment of women in the counterculture, the perceived liberated youth, still had a long way to go in terms of gender equality. This was actually a very grave problem in the movement, as women were still seen as companions and muses, for the most part, rather than artists themselves. Thus, Birkin’s character is worshiped from afar by the scientist and treated poorly by her photographer boyfriend, but in both cases very highly objectified.


George Harrison’s music is top-notch, of course, and the Wonderwall soundtrack represents the first solo record by a member of the Beatles. Massot gave Harrison carte blanche and promised that any music he composed would be used in the film. No doubt this was highly enticing for the Beatle who was just now coming into his own as a songwriter and whose songs were vastly overshadowed by McCartney and Lennon. Harrison made it his mission to use the score as a way of introducing Indian music to the West. But besides that, there are a wide range of styles exhibited here. Expert banjo music and superb guitar work are highlights. The guitar is  vbn,somewhat heavier at times than most Beatles tunes.

Wonderwall is a very conceptually interesting movie, though even at a short 75 minutes in the director’s cut, it seems long and trudges along in parts. But the concept still holds. Imagination should be integrated into, not overtake one’s life. And this is where the scientist eventually finds himself, having been enriched by psychedelic culture but ultimately continuing with his research, which is far more important.
Labels: cult movies film movie reviews