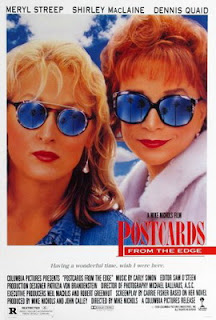 Written by the late Carrie Fisher, 1990’s Postcards from the Edge is a fun take on a unique mother-daughter relationship. In an interview with the Columbus Dispatch in 2012, Fisher claimed that the movie wasn’t autobiographical, but at times it’s hard to separate the fictional story of a drug addict actress and her famous mother from the real-life, sometimes rocky relationship between Fisher and her mother, Debbie Reynolds.
Directed by Mike Nichols, the legendary director behind The Graduate, Postcards from the Edge is a fun dark comedy with a touch of drama. In other words, perfect material for the director. The acting is loaded with A-list talent and, as such, is superb. Some actors, like Gene Hackman and Richard Dreyfuss, seem to have believed in the material so much that they took what amounts to glorified cameos to be in the movie, despite being top draws at the time. Dennis Quaid is perfect as a sleazy sex-maniac producer. And Meryl Streep was born to play Suzanne Vale, the daughter of Shirley MacLaine’s Doris Mann. MacLaine is wonderful, of course and some of the best quips in a movie full of great verbal barbs are given to her.
The story is about artifice in nearly all of its forms, and how it gets in the way of real, honest human communication. On one level, we have the obvious artifice of Hollywood. Suzanne has sort of fallen from grace as a Hollywood starlet and is working on various low-budget movies. How much of this is to blame on her drug use isn’t made explicit, but we can guess that it probably had a lot to do with it.
But, of course, Suzanne and Doris’ performances extend far beyond the movie set. For them, everything, every moment around other people, but especially each other, is a performance. Boy, does MacLaine deserve a lot of credit for bringing nuance to such a self-involved character. So much of this material could have gone the way of caricature, and easily, if it hadn’t been for the strong writing and directing and acting. Perhaps the most revealing scene in the movie, save the mother and daughter’s final confrontation near the end of the movie, comes just after Suzanne has been released from rehab. Of course Doris puts together a lavish party with plenty of Hollywood types attending. The mother and daughter each take turns singing for the guests. It’s clear that both of the characters are most comfortable, most “themselves” when performing. And when they sing we see the vulnerability, the raw emotion and the heartache that both characters are full of come bubbling to the surface. Maybe “You Don’t Know Me” was a bit too on the nose for Suzanne’s song, but it’s thankfully one of the few very obvious parts of the movie.
After Suzanne overdoses and is (thankfully briefly) seen in rehab, the premise of the story kicks in: Suzanne wants to get back to work on a new film, but the production company’s insurance people won’t take the risk of having her on set unless she stays with a “responsible party,” and by that they mean a parent, and since her mother is the only one in town...well, you get the idea. Her mother is an alcoholic and part of the humor of the situation is that she’s hardly a “responsible party.”
Everything leads to the Big Confrontation, of course, the moment when both characters drop their sarcasm and humor and bon mots and really bare their souls to each other. This is necessary, of course, if their griping at each other throughout the movie is going to have any meaning. During this final scene, we have some of the most piercing lines. “You only remember the bad stuff, don’t you,” Doris says to Suzanne and, gee, what adult son or daughter can’t relate to the feeling that they’ve been way too hard on their parents? And Suzanne gets hers in too: “You want me to do well, just not better than you.” Well. Of course there’s a tearful reunion at the end and things get a bit overly-sentimental, but it’s touching in its way and we realize that stripped of all their defense mechanisms, there’s real, intense love between this mother and her daughter.
Labels: cult movies film movie reviews movies