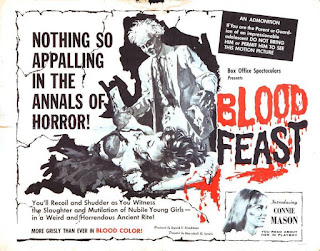 Hershell Gordon Lewis accidentally invented an entire film sub genre. He wanted to make a little cash, so he invented the “gore” movie. The first of these movies, Blood Feast was released in 1963 and it kinda sorta changed the entire direction of horror movies as they transitioned from the gothic and mad scientist flicks that had been popular since the beginning of film.

Starting with with nudie movies, Lewis moved into gore films when the nudie market became, uh, saturated. When the same thing happened with gore films in the early 70’s, he left moviemaking entirely. Over the years, while working in advertising and writing books on direct marketing, his reputation as an important cult filmmaker slowly grew and he finally returned to filmmaking in 2002. He died on September 26, 2016 at 90, having lived quite the varied life.

Mal Arnold plays the grey-haired killer in Blood Feast, the first of Lewis’s gore films. We open with Arnold, as Fuad Ramses, stabbing a woman in her bathtub. Yup, no ambiguity about who the killer is. And this is all before the opening credits. For his part, Arnold does a neat, though bad, Bela Lugosi imitation. He is, of course, a bad actor, but they all are, so at least the movie is consistent in that respect. Also, Ramses has so much product in his hair that it would take a hurricane to move it. And even then, who really knows.

Ramses’s plan is to resurrect the Egyptian goddess Ishtar through some weird ritual that involves ripping various innards from women and putting them into a pot and I guess adding seasoning before feeding the whole thing to a party of bourgeois white people. Ramses is also a writer, having published a book (self-published, one would assume) called “Ancient Weird Religions.” Hey, bud, maybe these religions are weird to you, but I’m sure it was pretty standard stuff at the time. Women send away to order the book and that’s how ol’ Ramses finds out their address. Why he doesn’t just kill random women, I’m not sure, but I guess they need to be into the whole “weird religion” thing for the ritual to work. Shit, I don’t know. Nothing makes sense anymore.

So, yeah, Fuad is a chef, but who to feed his meal to? Luckily, a woman is looking for a caterer for her daughter Suzette’s party. Also, Suzette (Connie Mason) is really into ancient Egyptian culture, of which Fuad is an expert in their cuisine. Also coincidentally, Suzette is dating detective Pete Thorton (William Kerwin), who is investigating the Fuad murders. Thorton is a bumbling idiot, which is why Fuad is able to get away with his killing spree for so long. I mean, the man is such a dolt that when he and Suzette are attending a lecture specifically on the ancient Egyptian practice of sacrificing people to Ishtar, he still doesn’t put it all together. When Pete finally grasps the obvious, bodies have been piling up all over town for days. Good for Fuad, bad for women who like keeping their tongues in their mouth.

Oh, man, the wonderfully bad acting and wonderfully silly plot make Blood Feast so much more hilarious than scary or cringe-worthy. I’m sure it was shocking enough in its day, but that’s the thing about being first: you get credit for innovation, but others come along and improve on your formula. Still, Blood Feast works as Z-grade comedy-horror. Even the actors seem to have trouble keeping a straight face. Connie Mason is probably the worst of the bunch, so in a bizarre sense she’s kind of the best. She sometimes even looks like she’s reading from cue cards, and hell, she might be. One of the funniest lines comes when an emergency room doctor tells Pete and his partner, “The face was hacked clear to the bone.” Whoa. Try not to be so technical, doc.

The movie was written by Allison Louise Downe, Lewis’s wife at the time. She also wrote other films for him, including the wonderfully titled She-Devils on Wheels. It’s sometimes hard to believe anyone wrote Blood Feast, the plot is so haphazard. Certainly the script they used is what’s known in the industry as a “first draft.” Anyway, the pacing isn’t bad. Things are occasionally kind of slow, but never plodding. At a little over an hour, the movie definitely doesn’t overstay its welcome.

In technical terms, the movie is actually...not bad. Sometimes the blood looks more or less a realistic dark red, but sometimes it’s pink. Probably this has more to do with a washed out print than anything else, but who knows. The direction is economical and there’s certainly nothing very pretty about the composition, though Lewis is okay at framing his shots. Sometimes there seems to be way too much head room, until a character stands up and the frame encompases the largest object in the room. Lewis uses inserts sparingly, but when needed for effect, such as in the stabbing scenes.

The main flaws, if you even want to call them that, are the bad acting and script, but the thing is competently shot, with actual thought going into shot choices and editing. The interesting thing about Hershell Gordon Lewis is that not only did he create an entire sub-genre, but he did it without a sense of passion for what he was doing. Gore movies were a business decision, a way to make money, and when the money stopped coming Lewis moved on from filmmaking completely. Lewis might not have considered himself an artist, but there’s something almost like art here.