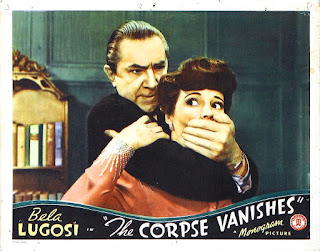 Well, okay, so here we have another movie where a guy uses the, er, fluids of younger women to make his old wife or girlfriend look young. Just scroll down to my review of Nightmare Castle and you’ll see what I mean. Weird. Guys and gals, aging happens. Nothing to get worked up over. I mean, not to this extent, at least.

So, yes, The Corpse Vanishes. What to say, what to say? Well, okay, so there’s this, I guess: It was released by Monogram Pictures in the 40’s. That should tell you a lot. Monogram was a Poverty Row studio that had the idea that you should just slap together a script, maybe get a genre-favorite actor who’s down on his luck to say a few words, point the camera at some hapless actors and call it a day. Don’t get me wrong: I’m not knocking the process. Wonderful things can result. Wonderful things like The Corpse Vanishes.

The film was directed by Wallace Fox, who made an incredible 84 films in his career, four of which were released the same year as The Corpse Vanishes. His filmmaking philosophy seems to have meshed perfectly with the Monogram Pictures ethos: Just point your camera at something, turn it on and let God sort the mess out. But, gee, poor Bela Lugosi. He was terribly typecast by this point in his career and was doing whatever he could just to survive. But even in wonderfully silly movies like this one, he still manages to be mesmerizing to watch and even moreso to listen to.

At just over an hour, the movie moves at a nice clip, though it still gets a bit dull in the second act. We get right to the meat of the story when the first bride drops dead at the alter less than a minute after the opening credits are over. Then we cut to Bela Lugosi in a hearse, grinning at the camera and we know something weird is up. Well, that’s good enough for me.

Luckily for the sake of the plot, society reporter Luana Walters (Patricia Hunter) is on hand. She wants to be a real-deal investigative reporter and a big scoop has literally dropped in front of her. When Bela’s people steal the body, Luana is on the case! Unfortunately, this is the 40’s and her editor believes that a woman reporter’s place is covering weddings, so even though she’s quite capable, he won’t let her pursue the story. He doesn’t seem to let anyone else investigate it, either. Not that this is an important piece of news or anything.

Next we see a frantic mother and her daughter in the DA’s office, asking for more protection. The mother is rightly convinced that since there is an apparent body-stealing bride murderer roaming the streets, maybe her daughter is going to be in danger. For her part, the daughter is quite convinced nothing is going to happen. I’m not sure why. But luckily the DA assures the mother that, “There will be no more theft of girls’ bodies.” Quite a promise to make, and one that the schmuck doesn’t keep. Yep, that girl drops dead, too. But, remember, the DA only promised that there would be no more theft of bodies, not that no more girls would die. Gotta listen closely to these things, yes?

So there’s a couple cops on hand to personally deliver the body to the morgue. Unfortunately, these cops are idiots. They fall for the ol’ “a car is on fire, so let’s get out of the car where the corpse we’re supposed to be protecting, both of us at the same time, and investigate the thing” gag. Sure as shit, while both of these boobs are looking at the car that’s been set aflame, you can almost see a little lightbulb fizzling over one of the cops’ heads: “Hey, maybe it’s not a gag. Maybe it’s a decoy!” one of them says. Gee, ya think?

So there we are at this mansion / castle kind of thing. Yeah, I mean, the movie is supposed to take place in “present day” 1942, but Bela has a dungeon where he takes these women he’s captured. Very strange. Who builds these things? Do they not ask why the owner wants a dungeon built in the basement? Well, as long as the check clears, I suppose…

So in addition to his wife, who is old and needs injections to look young, because otherwise, gross, I guess, there’s an old witch-type lady and her two sons that live in the mansion / castle. I bet they have two different fathers, because one of them is a little person and the other is as big as a professional wrestler. Or maybe they somehow have the same father, because both of them are idiots. I mean, just completely stupid. The big idiot kinda sorta molests the ladies? I mean, he strokes their hair while they’re unconscious, which is creepy enough. Socially unacceptable behavior, to say the least. Bela is decent enough to beat the guy with a whip for his transgression. This causes his mom to say, “My poor son. Why was he ever born?” but the actress is so bored with her role, and the line is delivered in monotone, so the whole thing comes off as if the mother is being sarcastic. There are other great lines like this that are hilarious either because of their delivery or their absurdity. Like when Bela says to the strong idiot, “I would never hurt you,” before proceeding to kill the poor bastard. Or when the district attorney exclaims, “He’s a hypnotist as well as a horticulturist!”

So finally, in this dungeon that exists in the United States in the 1940’s, we see why all these corpses (though we later find out they’re not dead, they’re just in a coma or hypnotized, the two terms are conflated) are disappearing. Bela takes an enormous needle (the scariest thing in the movie) and extracts some fluid from the ladies’ glands, and apparently the stuff is magic, because when he injects it into his wife, she’s not old anymore. So, yeah, all this killing and kidnapping because his wife has gotten old.

The Corpse Vanishes was featured on an episode of Mystery Science Theater 3000 and is often lumped into the “so bad it’s good” category of B-movies. But I don’t believe in the “so bad it’s good” thing. A movie presents us with a certain set of images and sounds and it either succeeds or it doesn’t. Whether it succeeds as it was intended does not matter. For this reason, The Corpse Vanishes is simply a good movie.

It’s a good movie because it’s an example of naive surrealism: a flick that’s not supposed to be surreal but either because of ineptitude or whatever other reason, the movie ends up being so weird that it takes us to a unique world devoid of logic. I hope I’m not coming off as snarky. Naive surrealism is a wonderful thing. It’s why Ed Wood is so worshiped for his singular vision. He’s not a bad filmmaker, he’s an Ed Wood filmmaker.

So what are some of the elements of The Corpse Vanishes that make it such a standout example of naive surrealism? Well, everything, really. But to be specific: Bela and his wife sleep in coffins. Why? No reason. There’s no supernatural explanation, they don’t gain energy from it. They just like it. Well...anyway, it’s the 40’s, so even though they’re married, they sleep in separate coffins. Wouldn’t want anyone to think anything improper is going on. Speaking of propriety, the good professor kidnaps our good society reporter Luana Walters and is about to withdraw that precious gland fluid from her neck when he laments that he would have preferred she have been a bride. Why? Well, of course no explanation is forthcoming for that, either.

The Corpse Vanishes is a wonderful weird trip that doesn’t wear out its welcome.
Labels: cult movies movie reviews movies