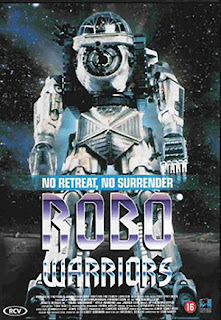 Robo Warriors is a movie so steeped the low budget 80’s action movie aesthetic that I was sure it had to come from that wonderful decade. But, no, this loose sequel to the cult classic Robot Jox (writer/director Stuart Gordon was given a “characters” credit on this film) came out in 1996. I suppose that explains those references to the high-tech “info-web.”


Robo Warriors takes the basic Robot Jox concept of giant robots fighting each other and adds aliens. So there’s that.


James Remar of The Warriors plays Gibson. I guess he’s the hero of the tale. He led a bunch of soldiers on a final campaign against the aliens, but they all died. One of those corpses belonged to child genius Zach’s father. Zach doesn’t blame Gibson, and despite the fact that Gibson’s last mission was a complete failure and led to the total conquest of the planet, Zach feels like Gibson is the only guy who can defeat the aliens by challenging them to a winner-take-all robot fight.


Cool concept.
Zach’s grandfather is a wise old man who sounds like Peter Falk. Low Budget Peter Falk somehow teaches Zach all about a mythic “earthbot” that’s hiding out in the jungle somewhere just waiting to be restored to its former glory...perhaps by a certain child genius? Perhaps. Well, we all know where this is going. Yeah, Zach’s gonna fix the long-abandoned machine and Gibson is going to pilot it and save the world. The only question, then, is whether the robot fighting sequences will kick any amount of ass?


Well, there are two fights. One is in the middle of the movie and of course the second is at the end. I have to say, a lot of care went into designing these robots and making them look believable. I really like the tactile feeling of these models. Other than that, the battles were a little weird. The robots, controlled by a pilot inside and a sort of engineer / tech guy from a station nearby, pretty much stand toe to toe with each other and shoot missiles. But I don’t really think anyone was expecting ballet here. At least I hope not. Anyway, they do sort of mix things up a bit at the end, when Gibson’s robot turns into a transformer, so that was nice.


As for what happens between battles, I guess it’s okay. Zach’s mother is a real ball-buster in mom jeans. But I guess if my twelve year old son wanted to run off and find the guy who led my dad to his doom in the hopes that said guy might save the world, I’d be a bit concerned about his safety, too. So we can’t really fault her there. Oh yeah, and for no reason except that we need (?) a romance, Zach’s mom and Gibson fall in love.


At around an hour and a half, Robo Warriors was about the right length. All their money seems to have gone into the robot battles, at the expense of compelling writing, acting, or direction. I mean, you can almost see James Remar mentally cashing his paycheck as he mumbles through the performance. Still, an hour and a half isn’t too much of a time investment for one good battle sequence, and one fairly impressive sequence at the end. Personally, I like fighting robots and explosions, so I was pretty happy.