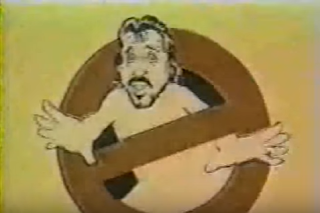 This is so very, very weird.

Memphis wrestling in the 80's was pretty weird, though.

Why would Lawler be afraid of wimps anyway? Wimps are, by definition, un-threatening.

Ghostbusters was pretty popular back then.

Controversial opinion: I am going to give the new Ghostbusters a chance.

Jimmy Hart was a great wimp, though. Probably still is. The funniest thing about his appearance on Legend's House was that he only ate baked potatoes and beans. Every day.

The wrestlers thought that was pretty weird. But they should have just let him live his life his own way.