Get Your Psychedelic Fix With Sea Fix 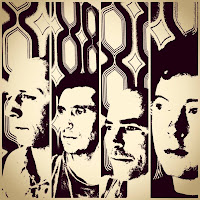 It was twelve years ago when I, a fresh-faced drunk of barely twenty-one years, made the journey from Trussville, Alabama to Atlanta to see my cousin Chris Hoke's band 3d5spd (pronounced 3D five speed) play to a packed crowd in a smokey music club (these were the days when music clubs were allowed to be smokey). The group had become something of a local cult band by that time. All the major alt-weeklies had written about them and their music was in regular rotation on several college radio stations.

The show I was attending had 3d5spd opening for The Dismemberment Plan, who were about to (literally in the next couple of days or so) head off to Europe to open for Pearl Jam. I'm guessing this was probably the band's peak, as far as live performances go, and I was glad I had been there to witness it.

So here I am twelve years later, listening to Chris's newest band, Sea Fix. These days, he's joined by Chris Rowell, Bret Estep and Tony Oliver. Based out of Birmingham, Alabama, the group is putting out some cool psychedelic pop tunes. This is the kind of music where just about everyone can find something to like. Certainly it'll make those dirty hippies who won't get off my lawn happy. But it also makes my mother happy. Hell, it'll probably even make your cat howl with joy. Sea Fix has enough gonzo throwback weirdness for freaks like me to dig, but it also has a familiar pop structure that won't alienate people don't exactly get their minds blown on a daily basis. Good stuff. Recommended for daily use.