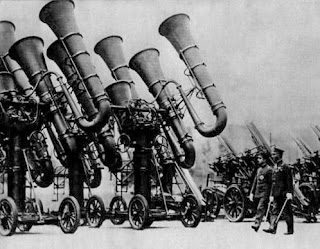 Twenty-five year old Infinite Sweatervest wasn't surprised at all when he heard that his boss, Trickling V. Oilspill, had been arrested for painting fourteen pigs completely blue and feeding them bacon, ham sandwiches, and olive loaf.

"Yeah," Sweatervest said, "I could see something like this happening. I mean, my first day on the job he has everyone take off their shoes and bronze each other's feet. He said it was a team-building exercise. Do you know how hard it is to walk around without the ability to move your toes? I've never had a boss as mean as Mr. Oilspill. I mean, all my life, all I've ever wanted was to design hats for hamsters, and here I was at the biggest hamster accessory firm in Mugwumpville, supposedly living my dream. Only, it turned out to be a nightmare. Bah! I can barely bring myself to talk about it. Once, I was on deadline and only had hours to design a spring mechanism that would allow a small plastic flower to pop out of a top hat whenever the hamster tried to scratch its ears. Well, Mr. Oilspill thought that it would help motivate me if he repeatedly hit me over the head with a hammer, sang "Amazing Grace," and put my mother on speakerphone so that she could yell at me. I never finished the project, to my great horror.

Mr. Sweatervest said that he's hoping his new boss, Velvet Murderblanket, will be a little easier to deal with.
Labels: Dispatches from Planet Mugwump humor