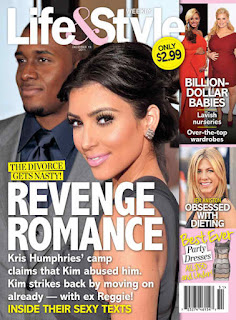 Well, the reliable and always truthful Life & Style magazine reported it first, and the Mugwump Corporation is proud to confirm that Kim Kardashian did indeed have an intergalactic revenge romance last week.  She hitched a ride to planet Bartlebyscrivener for a week of dancing and indiscreet mating rituals with the planet-wide warlord, Heslogoth the Flatulent.

For Ms. Kardashian, it was all just a little fling, something Celebrity Robotoids do out of boredom or after a major relationship ends.  Or because they have gas.  Or any reason, really.  But Helsgoth didn't understand earth culture.  Lack of titties in his life turns him red with anger.  And so Helsgoth fell in love with her and even detached one of his five breathing tentacles from his frothy and hairy chest, so that one of his underlings might fashion it into a traditional Bartlebyscrivener wedding belt buckle.  Trucker size.  But by the time it was finished, Kim Kardashian had already hitched a ride back to Hollywood.  Poor Helsgoth was tired and sad.

To cope, Helsgoth killed his best adviser, Axe Me Anything, slowly pulling each of his five breathing tentacles from his chest, one per day.  Feeling properly avenged, Helsgoth made a pizza.  Moth wings and pepperoni.  It was very tasty.