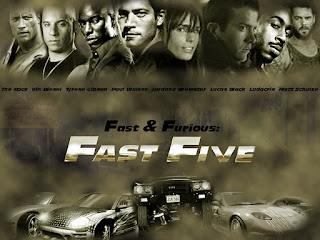 Should I watch Fast Five?  Should anyone?  Mugwump corporate policy is clear on this one.  Anything that might lead to the great Mass Irrationalization should be taken seriously.  But I've seen the first movie in this series, so have I essentially seen this sequel?  Maybe it'll be like when they made a sequel to Teen Wolf but it was actually a remake, replacing basketball with boxing. 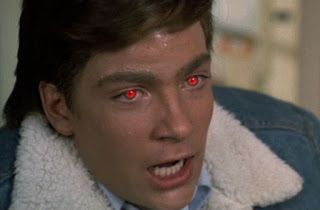 Will this be much of the same?  Are we simply adding a Duane "Rock" Johnson and calling it a day?  Hmmm....I wouldn't know.  I can't remember a thing about the first movie.  Not plot detail one.  So to compare the two flicks I would have to watch the first one again and that might end up being too much Deep Strange even for me.
When I think of The Fast and the Furious, I mean, when I really close my eyes and think about it, I remember a blur of colors, headaches, muscles, explosions, a hot Latin chick, more stuff exploding.


I remember that I left the movie theater snarly and mouth-foaming and with a craving for raw meat.  So, yeah, okay, maybe I will watch Fast Five.  One does need a good howl every now and again.  Plus you get to stare at the vroom vroom.