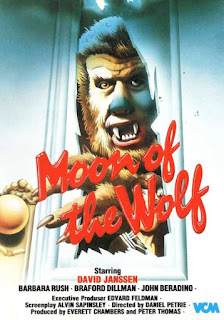 As a kid in the 80’s and early 90’s, I loved staying up with my mom and watching a silly made-for-TV movie. Moon of the Wolf was released in 1972, so I wouldn’t have seen this one. Probably would have scared me a bit, even though we don’t really see a werewolf until the final act of the movie. I got spooked easy after the sun went down.

David Janssen, who played Richard Kimble in The Fugitive, stars as the sheriff in a one-horse Louisiana town who has to solve a grisly murder. A wolfy murder? Anyway, a woman is dead and mauled and it looks like a dog did it. Luckily, Janssen is on the job and he’s ready to solve the case. He’s a hardscrabble fella with a scratchy voice, so you know he means business. Also, it’s very hot in Louisiana, so the good sheriff has to leave his shirt open so that he can air out his ample chest hair. I don’t have chest hair. Just a patch of the stuff in the middle of my titties. I sometimes wish I was more hairy, but then I wonder if I would just lose food in there and scratch at it a lot

Plenty of white people in this town. Except for a black housekeeper, of course. This was 1972, so I guess we couldn’t expect too much.

Bradford Dillman (awesome name!) plays Andrew Rodanthe. He’s rich. Like, crazy rich. And his family has basically run this sharecropping town since it was founded. Dillman looks like Anthony Perkins as Norman Bates, so we know who the bad guy is pretty much immediately. The movie tries to throw us off the trail by giving a sort of motivation for the murder to the town doctor, but we know what’s up. Norman Bates is a werewolf. Good. Let’s do this thing.

No. Not gonna happen. Not for a while, at least. We have to go through some relatively boring murder mystery stuff first. Don’t be fooled: This is mostly a run-of-the-mill TV mystery movie except that a werewolf in bad makeup shows up at the end. Not that I’m complaining. The slow pace gave me a chance to truly examine David Janssen’s chest hair and marvel that God allowed something that special to exist.

Oh yeah, Rodanthe has a sister. Why? No reason that I can tell, except that the good sheriff needs a love interest. Barbara Rush is pretty okay in the role, but there’s not much for her to do. Oh, except there’s this scene where she’s wearing a fancy dress and is gardening. The sheriff happens by and she invites him to have some lemonade. Luckily, there’s a table with some lemonade set up on the lawn of the Rodanthe estate. You see rich people do this all the time in movies. Was it really that tough to go inside for a drink? Why not drink from the hose? That’s what my brothers and I did when we were doing yard work for our parents. I’m sure it wasn’t as grueling as gardening in a fancy dress, but we got by, I suppose. I guess the servants put the table there? Do the poor bastards have to haul this table out to the yard whenever Ms. Rodanthe feels like doing some gardening? I guess they have to haul it back in, too? Strange, strange. Very complex, being rich. Anyway, they have some lemonade.

We do finally get to see a shadowy werewolf attack with about twenty minutes left in the movie. It’s better in the shadow, because we don’t have to see the awful werewolf makeup. The one deputy the sheriff has on staff gets killed, as well as a guy they’re holding in one of the jail cells. The guy’s body is mauled and mangled, but the doctor still checks his heartbeat with a stethoscope. No heartbeat? You sure he’s dead? Maybe check again. You never know about these things.

Then there’s a final werewolf attack where nothing much happens. A barn burns. Ms. Rodanthe shoots her brother to death. All very terrible stuff. Everyone’s sad and the movie’s over, and haven’t we really learned some quality lessons?
Labels: cult movies movies