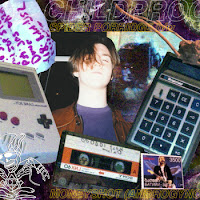 Spider porridge b/w moneyshot (androgynous) is the newest release from the Mugwump Corporation's favorite band, childproof. But the tracks themselves aren't anything new. In fact, they're pretty old. Humble songwriter JP Marin was just seventeen when he recorded these tracks, way back when weird kids in black shirts were recording their tunes onto cassette tapes. Our younger readers can feel free to Email me and I'll explain what a cassette tape is.

What I like about both of these songs is that you can already sort of see the beginnings of the two very different directions the band would come to take. These days, childproof records foot-tapping pop songs a la "dance while the sky falls." At the same time, they play improvisational noise music with the    likes of New York's Gary Wilson and Thee Pause.

You can hear both of these tendencies most clearly on the song "moneyshot (androgynous)". There's the Beatles influence in the vocals, but there's also the weird carnivalesque keyboards to consider. The first track, "spider porridge" is a more uptempo tune. It's definitely the more pop sounding of the two. The low-fi sound of the tape makes is seem as though the keyboards were coming through some sort of 8-bit video game. I'm not positive how much it was actually intended to sound that way. We are, after all, talking about recordings on a cassette tape that is itself a teenager now.

I think it's really cool that JP has decided to release these early recordings. Would I ever release the "poetry" I wrote when I was seventeen? The stuff that I scribbled into my notebooks late at night while I listened to Marilyn Manson? Hell no, at least not until I've been dead for at least three years. And even then, you'd need to poke me a few times just to make sure I'm not going to wake up.