As some of you may know, Patrick King and I have been friends since before either of us had killed our first man in battle.  Still fledglings, we were.  We used to sit around and drink beer and weave stories like rugs of butt hair.  I lent him some taste in good music and he tried to do the same, but come on, who actually likes the Counting Crows?  I spent more time at his house than my own and called his mother "Mom," still do.  We even dated sisters and at one point decided to switch up.  I only say this to give you an idea of how well I should know him.  Last night, however, I was shocked beyond belief by his unforeseeable and unforgivable actions.

I'd just finished shucking a large pile of bearded clams.  My fingers were as slimy as could be.  Since I don't have any running water, I usually go wipe my hands in a pile of straw I keep for my horses.  As I was approaching the stables I heard my best mare Beulah making sounds of distress.  I opened the creaky stable door and hurried in, expecting that it was nothing more than a possum hissing at her.  Poor dear does scare easily.

There stood Beulah in her little stall, nostrils flared and ears held back against her head like a dog.  And behind her, his paunch keeping time to some rhythm I couldn't hear, was Patrick, fucking my prize mare!  It was ghastly, yet strangely beautiful and entrancing.  After a moment I gathered my wits and I did what any red blooded American would do.  I raised my loaded shotgun (because I only ever set it down to shuck bearded clams) and cried, "You poor bastard, git your greasy green bean outta mah gurl.  She was a virgin and you dun defiled her.  I was savin' her fer mah burfday." 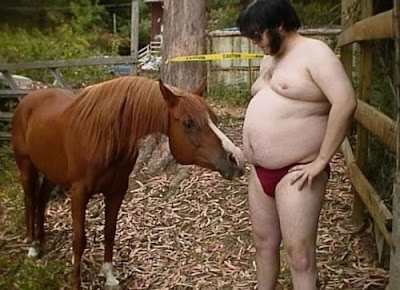 Without even seeming to hear me, he gave a jerk, his eyes bulged out then rolled back.  He opened his mouth and a trumpet sounded.  A disco ball started spinning overhead and the camera panned to curtains blowing in the breeze.  Beulah whinnied, a horn began sprouting from her head and a jar of mayonnaise crashed to the floor.  For a moment they were both shining, I swear.  Horses and humans are the only animals that have hymens.  And most of us don't.  Patrick didn't.  Beulah didn't anymore.  I broke mine years ago when I wrapped my car around a tree.  And now I can never get pregnant.

The wreck also affected my memory.  Now I disbelieve truth and worship legends.  Or maybe I'm just a liar.  Beulah wasn't really Beulah for one.  She was my stallion Blue and he was certainly no virgin.  I had celebrated my birthday early.

On a completely unrelated note, I've started making word puzzles.  Can anyone guess what this one is?  Leave your guesses in the comments.  I'll give you the right answer in my next post.  You may get the chance to feel clever for a moment. 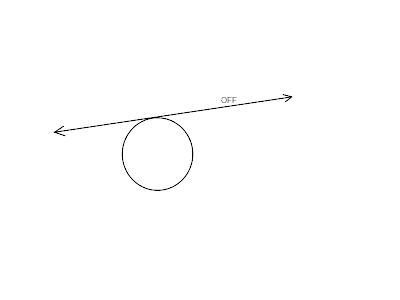 Labels: Gonzo Who humor the human race is doomed