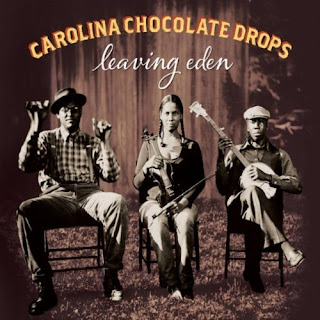 With Leaving Eden, the Carolina Chocolate Drops have a new lineup.  Hubby Jenkins replaces Justin Robinson as the third multi-instrumentalist, along with co-founders Dom Flemons and Rhiannon Giddens.  This album also sees the addition of Adam Matta, an incredibly talented beatboxer.  What we get with this combination is an ever more soulful sound blended with classic roots music.

The Chocolate Drops' amalgamation of contemporary hip-hop and soul music with much older musical traditions like jug band, Appalachian string music, and, this time around, even traditional Irish folk music, works better than ever.  While they have a unique sound, there's never a time when it doesn't remind us of America's rich musical heritage (which, of course, goes back to European folk traditions).  It also reminds us of a time when "black" and "white" music, at least in the South, didn't sound so different.  After all, roots music like country blues and string music were never performed by professionals.  The Carolina Chocolate Drops are creating a new vernacular music, by blending classical American working class music with contemporary sounds.

Much of Leaving Eden creates the illusion that we, the listeners, were invited to a late-night front porch jam session.  Listening to it, we learn a hell of a lot about music, and a little something about ourselves.
Labels: country music folk music music