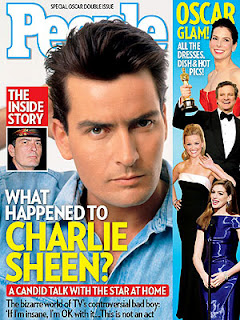 According to MSNBC, Charlie Sheen has cured himself of the crazy and is now a fully functional Hollywood adult manchild.  Hmmm, perhaps, but his recent vacation to planet Moondance V might prove otherwise.

Moondance V is, or, rather, was, known as the Flying Saucer Planet because of the Moondancians' all too sincere affection for silly Hollywood science fiction films.  They especially loved Battlefield Earth, starring the Great Travolta.  They would sometimes watch it two or three times a week in their little makeshift movie houses.  They spent so much time watching these movies that they grew quite lazy.  Their beards fused with old popcorn, the first known cases of popcornbeard in the universes.

Alas, they also had terrible eyesight.  When Charlie Sheen arrived, drunk and stoned and raving about how he was going to "fuck every popcornbeard on the planet," the Moondancians gave themselves to him willingly, convinced that he was their long-awaited Lord and Savior, the Great Travolta.