Dreams That Money Can Buy -- A Last Gasp Of Surrealist Filmmaking 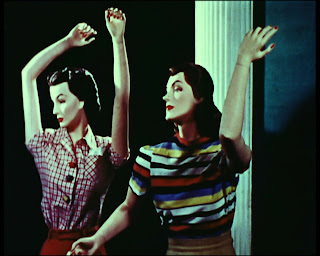 Released in 1947 by artist and film director Hans Richter, Dreams that Money can Buy is actually a collaboration between surrealist and Dada artists, most of whom directed a portion of the film via the many dream sequences. Max Ernst, Fernand Léger, Man Ray, and Alexander Calder all wrote and directed their portions of the film, while Marcel Duchamp wrote his with Richter directing. That’s a lot of chefs in the kitchen, but since these are dream sequences which mostly stand on their own, one vision doesn’t get in the way of another.

And there’s a story! Sort of. The frame sees Joe (Jack Bittner) discovering that by staring into the reflection of his eyes in a mirror, his dreams are projected on the pupil. Joe, being an unemployed hipster-type sees this as a way to finally make a stable income for himself. So he opens up shop, staring into people’s eyes and selling them their own dreams back to them. For most of the film, we’re watching people dream along with Joe.

A fine enough setup which still allows the individual directors pretty free reign over the piece that they contribute. Being dreams, though, they’re more or less surreal, with no plot to speak of. Only emotions and vision.

Richter was quite suited to a film of this sort. He was, of course, a founding member of the Cabaret Voltaire, which made him one of the first Dadaists. He had a long life and career, so he was involved with a lot of movements and artistic circles. For his part, Richter seemed most interested in exploring the unconscious, and collaborating with friends. He seemed to do fine as Dada became surrealism, which turned into the postwar avant-garde.

Surrealism (and Dada, to a lesser extent) was obsessed with dreams as a portal to the unconscious. They took Freud a bit too seriously.

Middlebrow critic Bosley Crowther, not surprisingly, was not enamored with the film, writing, “As with most things experimental -- at least, in the cinema form -- this effort of Mr. Richter’s and of his collaborators, has obvious flaws.” Gee, Crowther, way to throw an entire art form under the bus. But Crowther covered mainstream flicks, and this one definitely wasn’t for the mainstream. Richard Suchenski of Senses of Cinema, in his survey of the cinema of Hans Richter called Dreams “The first attempt by a member of the original European avant-garde to make an experimental feature in the postwar era.” And indeed, for that at least, it is a significant work.

It is always playful, and at its core satirical without being pushy about it all. Playfulness was at the heart of Dada, along to giving an angry middle finger to any and all sacred bourgeois conventions. So although it doesn’t move at a great pace, Dreams makes up for it a bit in whimsey. Which makes it fairly not too terrible.

There’s no synch sound, so much of the dialogue comes from the narration. The narrator, no doubt intentionally, sounds like the voice of God figure you would hear in old educational film strips. It’s wonderfully disjointing hearing this guy narrate weird dream sequences.

Sexual liberation is, of course, only one component of an holistic liberation that surrealists and Dadaists sought. Everyone who walks into Joe’s office is changed in some way, liberated from their unconscious shackles, even if they don’t want to be. At one point, a question is posed: “When did I begin to build this shell around me?” And, indeed, this could apply to any of the characters, especially Joe.

And though the dreams are always about people, not every dream features them. In one sequence, mannequins are used in place of people. It’s not stop motion. The movements are too broad. It’s more like a series of still photographs that give the illusion of movement. And why not? Movement in movies is an illusion anyway.

In addition to mannequins, there’s a sequence involving wire. It’s the dream of a wheelchair-bound blind man, who fiddles with the stuff all day to have something to do with his hands. This is a very clever move, and no doubt it was Richter who fitted the frame to the dream, but it makes a decent amount of sense that a blind man would dream of textures, so why not?

Dreams, though not as interesting as its premise might imply, is quite a significant film. It represents one of the last gasps of pure surrealist cinema before it split into avant-garde non-narrative film or incorporated itself into narrative, script-based films. This marks an end to a film movement that began with Germaine Dulac’s Seashell and the Clergyman in 1928. It’s not much more than a curiosity, but it’s worth checking out, if only because it is a significant historical point for weird cinema.
Labels: dada surrealism weird movies