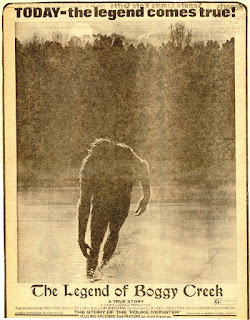 The Legend of Boggy Creek was written by Earl E. Smith, but the whole thing represents the vision of director Charles B. Pierce. The story was pieced together from the tales of local residents from Fouke, Arkansas, some of whom appeared in Boggy Creek as themselves. The so-called Fouke Monster, basically a sasquatch, was a folk legend that residents claimed was real. Reports began to surface in newspaper articles around Arkansas in the early 70’s and they seized Smith’s imagination. He knew he had found the subject of his first feature film.

Pierce is an interesting character. A self-motivated guy with a ton of ambition, he worked as a weatherman and a children’s show host named Mayor Chuckles before starting his own advertising firm. He made commercials for all sorts of companies throughout Arkansas. The owner of a trucking company client loaned Pierce $100,000 to get started on shooting Boggy Creek. The film was an almost instant success in cheap movie theaters and drive-ins and it put Pierce on the map. He went on to direct several more features before his death in 2010, one of which was the 1976 cult classic The Town that Dreaded Sundown.

Boggy Creek was a big influence on the filmmakers behind The Blair Witch Project, which, of course, kicked off the “found footage” horror subgenre that’s kept hanging on deep into the early 21st Century. Boggy Creek isn’t found footage because it was never lost. Instead, it’s supposed to be a straight documentary with re-enactments. Further complicating things, some of the locals who had experienced the monster appear on camera as themselves, telling their own stories. Truly, this is a case where reality and fantasy intersect. There’s some clearly fictional elements, including the frame story, but some of the movie is just the plain ol’ facts.

The movie begins with grainy 16mm footage of some swampy Arkansas woods. This is the kind of thing where the atmosphere alone would have scared the shit out of me as a child. Kind of like when I watched the first two Friday the 13th movies back-to-back when I lived in a small house on a hill across from some dairy farm cornfields in the middle of nowhere in a tiny Upstate New York town. Boggy Creek would certainly have been some sort of revelation if I had watched it back then, rented on a VHS tape from the local video store. Even better, of course, would have been to have watched the film in a drive-in during the 70’s.

Boggy Creek has a PBS nature documentary feel about it. It also feels like a precursor to Unsolved Mysteries. It has a lackadaisical, slow pace at times, kind of like the film’s subjects. There are parts of the movie that are supposed to be re-enactments of some of the incidents. At first I scoffed at the more cinematic nature of the shots and editing during the re-enactment scenes, but soon enough I let it go and settled into the strange world of the movie. Last House on the Left, released the same year, had a similar handmade aesthetic, though with much more grim results. It’s hard to believe now that a horror film from the early 70’s could be G-rated but Boggy Creek really was. There’s no gore, only a creature that we barely see.

In fact, our first glimpses of the beast are very grainy and reminded me of the Patterson-Gimlin film, that 1967 home movie that supposedly captures a real life sasquatch in the woods of the Pacific Northwest. Pierce said in interviews that he kept the creature obscured because he wanted to preserve a sense of mystery, and while it’s true that mystery is an essential element of a lot of successful horror films, he clearly also showed as little of the creature as possible so that we wouldn’t see a dude in a cheap gorilla suit trying to scare bad actors. Anyway, it doesn’t matter why Pierce decided to emphasize the mysterious. It works. Our fears lie in the shadows.

There’s no tight narrative holding the thing together. Only a series of interconnected vignettes featuring characters that are more or less forgotten about after their segment is over. The only extended sequence comes near the end of the movie, with fifteen minutes or so dedicated to a single story, a tale of out of two out-of-town families who have come to Fouke for work who end up having to fend off the angry beast by shooting the shit out of it with shotguns from the front porch of their rented cabin. This is where we finally get a real glimpse of the beast, and, well, it’s a doozy. It’s pretty silly when we see a Cookie Monster-looking arm with black fur emerge from the side of the camera frame and angrily wave itself around. This is, as you might imagine, the least scary part of the film.

For a bunch of amateur actors and real-life folks just telling their stories, the acting sometimes, once in awhile, isn’t too bad. The real-life folks are allowed to go on tangents and, really, talk as much as they want. It reminds me of the front-porch Southern storytelling that I would get a small glimpse of when my mom would take myself and my brothers down to Alabama to visit our extended family down there. One of the most interesting “characters” is Herb Jones, a hermit type who literally lives in a shack by the river. I could watch this guy roll cigarettes and tell stories forever.

Really, though, Boggy Creek isn’t serious fare at all. Unintentional or not, it’s just too campy to take seriously. But you can still have a lot of fun with the flick as long as you keep your tongue firmly planted in your cheek, sit back, and enjoy the weird ride.
Labels: cult movies horror movie reviews