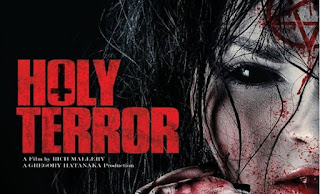 Holy Terror, a horror flick released on digital platforms like Amazon Video this month, proves that it’s pretty damn hard to write and direct an original exorcism movie. Not only is this film’s story muddled, but every idea is recycled from another, better movie.


The first two minutes or so are actually quite interesting. Cool visuals, with everything a pea-green or vibrant black color. A priest named Jacob (Scott Butler), a nun (Kristine DeBell), and another priest are performing an exorcism on some poor young girl when it goes wrong and she croaks. Jacob is so flustered by the experience that he questions his faith and leaves the church. Cool story, but it’s time to forget about Jacob for about thirty minutes while we get to know a not-at-all pleasant couple, Molly (Kelly Lynn Reiter) and Tom (Jesse Hlubik), who’ve just lost their kid partially because of Molly’s neglect. Weird stuff is going on at their house and, who knows, maybe their dead kid is coming back in the form of a ghost. For some reason. But it’s all a ruse, anyway. A demon is being a wily trickster, pretending to be the kid so that he can invite himself into the body of Molly’s sister Billie (Nicole Olson), who’s also not a very nice person, and a junkie to boot. Yes, quite a rambling plot for something that lasts less than 90 minutes. Holy Terror certainly won’t be added to the pantheon of great possession movies. The Amityville Horror and, of course, The Exorcist (and maybe The Exorcism of Emily Rose) aren’t giving up the top position anytime soon.


After the pretty cool first two minutes or so, we get a mundane suburban setup. We watch vague characters who do vague things and go to their vague jobs and speak as though they’ve never heard an actual human talk before. The acting isn’t very great, but it’s not so bad that it can go full circle and become “so good it’s bad.” God, the worst part has to be the overacting. You see, people, a woman in mourning does not always get hysterical and scream all the time. Sometimes she’s quiet and sad and doesn’t freak out and become an emotional wreck. It’s okay to tone things down a notch, even in horror movies. Also, if Billie is a broke junkie, why is she snorting cocaine? Give her something like crack. Something cheaper than cocaine. If she can afford cocaine, whether through legal means or not, she can afford a place to stay. Well, one would assume.


Another big problem is that Tom is just such an overwhelming asshole. I get that he’s skeptical about the whole “son coming back from the dead” thing, but maybe cut your poor grieving wife some slack? At least pretend to believe some of this stuff. And, look, I’m a skeptic myself, but you kinda have to be an idiot not to believe your ears and eyes when the evidence presents itself as obviously as it does here. I mean, the weird voices, the fact that Billie can slam slam doors with her mind...that has to count for something, right? I don’t know, maybe Tom is a complete sociopath. When Billie, fully possessed by the demon now, busts a huge gash in her head open, Tom doesn’t immediately call an ambulance. This is a weird family.


To be fair about the acting, it isn’t all bad. Scott Butler puts in a great effort as Jacob, the priest who loses his faith.  Lisa London, a veteran B-movie actress is rather charming as Aunt Janice, the mildly psychic hippie who accidentally conjures a demon in one of the funnies seance scenes I’ve ever seen, though I’m positive it wasn’t intended to be. Aunt Janice actually uses an old rotary phone to contact what she thinks is the spirit of the dead son, but is actually a mean ol’ demon pretending to be the kid. Ooops!
We get our exorcism by the end of the movie. Reluctant priest Jacob finally agrees to do it, a plot twist my cat could have seen coming. Oh yeah, and boneheaded Tom finally gets his comeuppance during this scene, and I think writer / director Rich Mallery intended for his audience to feel bad for the guy who finally, after the evidence was too overwhelming to deny, believes his wife’s story. But, yeah, he was a jerk. I’m not sure anyone is going to be sad to see the guy meet the ol’ Grim Reaper.

The bad thing about all of this is that there was a very good story buried underneath this weird plot could have been told effectively, even with the subpar acting. A dead boy who comes back for whatever reason while his parents work out their unresolved issues? That’s a movie, right there. But, as it stands, that’s not what we got.
Labels: horror movie reviews movies