Don't Look in the Basement (There's a Plot Point Hiding) 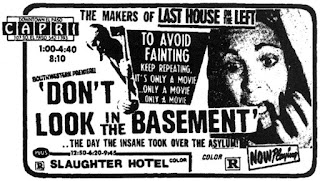 The 1973 low budget grindhouse horror flick Don’t Look in the Basement is a prime example of movie logic concerning insane people. You take a character’s quirky defining trait, turn it up to eleven and viola, insanity! So here we have a soldier who thinks he’s still in Vietnam, a judge who only speaks in legal jargon and a nympho who only...well...you can see where this is going.

The insane are housed (literally, this is a farmhouse out in the county) alongside the doctors and nurses in an experimental treatment facility. There’s no locks on the doors and the staff refer to the patients as family. Not the best idea. Doctor R.D. Laing actually tried this in the 70’s in London and the patients ran amok and destroyed the buildings he’d rented. I have no idea whether director S.F. Brownrigg had ever heard of Laing, but I doubt it. He was a humble Texas exploitation filmmaker. The concept is used more as a way to make the “twist” ending work, although most people will see it coming from a few hundred miles away.

Don’t Look in the Basement is actually quite good. The acting ranges from not bad to serviceable, and none of it is too embarrassing. Brownrigg at least cared marginally about the product he put out. Unlike, say, Hershell Gordon Lewis, there’s a modicum of thought put into the craft of filmmaking. Lots of skewed POV shots and weird reaction shots, but that’s to be expected with this kind of thing. There’s definitely a lot of silly choices, but most of them have to do with the plot. A woman cuts her tongue out and the nurse on duty doesn’t call an ambulance? Sure, why not! A guy from the phone company drives an hour out of his way to fix the asylum’s phones and his company never calls the cops when he doesn’t return? We must be watching a grindhouse movie!

The movie takes itself oddly seriously. I mean, you have all these cartoony characters running around, but there’s not a laugh to be had, at least not one that’s intentional. Still, this being an exploitation movie from the 70’s, there’s a few things you can expect. There’s gore, sure, but most of it is saved for the final few scenes. The finale is great, by the way. When all hell breaks loose, an unlikely killer takes almost everyone out at once with his axe and then enjoys a popsicle. There’s plenty of (female) nudity, which I’m assuming was the reason the nympho character was written. Good stuff, and it never gets boring. It’s not as smart as it wants to be, not by a longshot. But that’s okay.

Don’t Look in the Basement was written by Tim Pope, who never wrote anything else afterward, though he went on to be a prolific music video director for bands like The Cure, Ministry, and Iggy Pop. Probably a good move, certainly in a financial sense.

The movie was directed by S.F. Brownrigg, who only made five features, including Don’t Look in the Basement. As you probably won’t be shocked to learn, he had trouble getting funding for his movies. Don’t Look in the Basement is his first and most recognizable film, having developed a cult following over the years. His son Tony directed a sequel to the film in 2015. Doyle Wolfgang von Frankenstein is going to star in a remake that shoots soon. Called Death Ward 13, it will be set in 1973, the same year Don’t Look in the Basement was released into drive-ins as a double feature with Last House on the Left. Ah, to have been alive back then to have seen that!
Labels: cult movies horror movie reviews movies