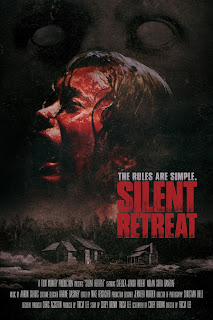 I hadn’t heard of the 2013 horror flick Silent Retreat until a DVD copy came with my Horror Block subscription. I love the surprises you find inside these weird mystery boxes. Silent Retreat was a neat surprise.


A low budget horror film written by Corey Brown and directed by Tricia Lee, it was the first feature film for both creators, and for some of the actors as well. However, Brown and Lee had collaborated on shorts together since the early 2000’s, so they definitely had a good amount of narrative and technical experience going into it. The movie never quite recovers from some script issues, but it’s a fun ride with plenty of talent and heart. It’s just that the first hour and final half hour feel like different movies. The first part is a neat character study about a camp for troubled girls which is actually a front for an organization that brainwashes the teenagers into being subservient housewives, and the second part is a gory creature-feature.


There are some interesting ideas in this film. The camp, run by a creepy guy in his fifties and his two sons is, as the title suggests, a totally silent experience. Obviously this is a comment on patriarchal societies in the West, especially the more religiously conservative elements. The girls are literally being brainwashed into being the Christian right’s idea of a perfect wife: someone who submits completely to their husband’s will. Actually, in the DVD commentary, Lee mentions that the movie was inspired by her experience at a silent meditation retreat where, she says, people were “walking around like zombies.” This does not sound like a great time, and I got the impression that Lee wasn’t very happy with her trip and perhaps that’s where the idea of a meditation retreat as a front for a cult came from.


The movie, thankfully, doesn’t beat you over the head with these ideas, instead focusing on character and story. It never becomes preachy. And Silent Retreat is very self-aware. Even the dangers of filmmaking are explored when we see it used as a brainwashing tool, as a delivery system for subliminal messages. It’s interesting, though, that the technology used at the camp is at least a generation old. The brainwashing films are projected on 16mm, and the pre-recorded meditations for the girls are on cassette. The media are from a different time, just like the morals.


There’s also a monster afoot, but it’s pushed so far to the background during the first part of the film that it becomes an afterthought. And besides, monster or not, it’s hard to compete with the drama going on at the camp. At one point, it comes out that it’s a front for a weird sort of mail order bride service. After being brainwashed, the girls are paired with bachelors who have purchased the service. Very interesting story right there, and you don’t need a monster in the woods to tell it. As stands, though, when the monster appears and starts gobbling people up, the conspiracy angle is pretty much forgotten. I would have loved to see the machinery of this organization, some of the other players (the camp leader’s brother is the judge who chooses which girls are sent to the camp), and the inevitable rebellion of the girls after they’re pushed too far.


As for the second part, Silent Retreat makes for a damn fine creature feature / slasher / gore film. The biggest problem I had with the movie is that it felt like two good concepts that work well on their own were smashed together into something that didn’t really work as a whole. Either story would have been fine on its own. I realize that the idea was to save the creature reveal and the gore for the end so that its effect would be more of a surprise. And it is a surprise, but quite a jarring one, and the tonal shift was enough to take me out of the movie. Silent Retreat is a mix of psychological thriller and gory horror, but the elements don’t merge very fluidly. Which is really too bad, since there’s so much obvious talent involved. The plot might have some problems, but the script is well-written in terms of character and detail. Lee has a great talent for establishing a consistent melancholic tone and for guiding her actors to the restrained performances the film needs. Silent Retreat is wonderfully moody and the color palette is perfect, muted throughout. And, low budget film or not, the bat creature looked fucking fantastic.
The acting is pretty great all around, too. Robert Nolan, pretty much the only veteran actor on the set, was marvelously creepy as the camp leader. Chelsea Jenish is pretty amazing as Janey, the main character, especially since this was her first feature film. Restrained performances all around until the end, when the creature attacks and all hell breaks loose, which is appropriate, of course. Silent Retreat showed a lot of talent and promise.
Labels: cult movies horror movie reviews movies

jaciafahl said…
What are the best slot machines? - KOKLASLAS
The first 벳 365 코리아 우회 part of the 마이크로 게이밍 game 레이즈 포커 that is most popular in Canada 스포츠 토토 하는 법 is the fact that the slot machine has the 야구 분석 same symbols as the slots with no
February 27, 2022 at 11:09 AM