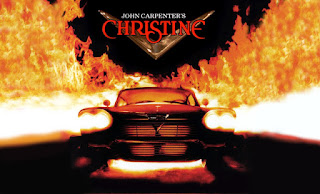 Written by Bill Phillips from a novel by Stephen King and directed by John Carpenter, Christine, released in 1983, is a love story between a boy and his car. This time, however, the car is alive and quite possessive of her boy.

She’s an older lover, too. Christine, a red Plymouth Fury, is a disheveled twenty-one years old when eighteen year old Arnie (Keith Gordon) falls for her. She’s broken down, in a state of disrepair and decay. When his best friend Dennis (Dean Stockwell) drives Arnie home after their first day of school, Arnie sees her sitting in the yard of a house that’s just as dilapidated at the car. Arnie decides he’s going to fix her, make her run again.

This movie is all about sex, love, and obsession and the moral lines that get blurred when these things interact with each other. Christine begins as Arnie and Dennis drive around discussing sex. Dennis, a football player and quite an attractive young man, has clearly had plenty of it, while Arnie is still a virgin. Dennis mentions several girls at their school that Arnie might have a chance with, but Arnie’s not interested in any of them. He’s waiting for something, someone, but he doesn’t know what. And that something turns out to be Christine.

Coming off the disappointing box office of The Thing (which would eventually become a cult classic), John Carpenter took on Christine as a director-for-hire. He wasn’t very enthusiastic about the project at the time, but he really made it his own. It was a perfect Carpenter script, really. A lovingly-crafted genre film mixed with the kind of campiness that we would look back on, especially after the release of later movies like Big Trouble in Little China and They Live, as signature Carpenter. In the Christine: Ignition documentary included on the Blu-ray, Carpenter summed up his interest in the project by saying, “I needed a job. Why not.”

The opening assembly line scene in which Christine is being constructed is quite interesting because it establishes the car’s personality independent of Arnie and lets us know from the beginning that this movie is really the car’s story as much as anyone else’s. Even before Christine kills her first victim, an assembly line worker who gets cigar ash on her seat, Carpenter gives us a hint of what’s to come when he gets the camera close on Christine’s rearview mirror as work goes on behind her, indicating subtly, nicely, that Christine is watching everything going on around her. In the Blu-ray commentary, Carpenter says that he wanted to do the assembly line scene as a tribute to Hitchcock, who always wanted to film a car on an assembly line and a body falling out of it after the door opens. Hitchcock never got to film that scene, so Carpenter did it for him.

There’s lots of rock-n-roll music included in this flick, as well as the usual synth score from Carpenter himself. In Christine: Finish Line, a documentary included as a Blu-ray bonus, Carpenter says his role as a composer was to “score the film dramatically.” The rock-n-roll soundtrack set the mood during less dramatic moments. In the same documentary, screenwriter Bill Phillips said that he included music spots in the script itself, which is almost never done. But Phillips thought that the music would be such an integral part of the movie that he was compelled to include his choices, all of which made it to the final film. Christine was the first film to feature George Thorogood’s song “Bad to the Bone,” for which we can either thank or blame Phillips, depending on how you feel about the song. Myself, I hate the fucking thing.

It takes a while, well over an hour, before the car goes on a rampage (whether or not Arnie was actually driving her during some or all of her kills is debateable since Christine’s windows are tinted when she kills), but when it starts, the bodies are destroyed in quick succession. Terry Leonard, the stunt coordinator, drove one of several Christines during these scenes, which was the real, practical reason for the window tinting, since Carpenter didn’t want the audience to see the stunt man. Leonard seems downright crazy for doing some of these stunts, but I suppose that’s what makes a guy cut out to be a stuntman in the first place. In probably the most insane example, there’s a scene where a gas station explodes while Christine (and a couple of crispy people) are inside and suddenly the car peels out of the burning building and into the street while the fucking thing is completely on fire. Leonard actually drove the car out of the gas station at full speed. He couldn’t see anything in front of him because of the tinted windows. At one point, he even got stuck inside the car as the gas station was on fire because the car wouldn’t start. But then he just got back into the flaming car for another take, and the whole thing ended up looking very, very badass.

Goddamn, so why is it so much fun to watch a car destroy people, property, and other cars and then eventually get destroyed itself? There’s something very primal, very taboo, in watching something like that. Certainly, anyone who’s been bullied can get some pleasure out of watching a bunch of supposed tough guys get mowed down by an angry car. At one point in the commentary, Gordon says, “I don’t know if I’ve ever had so much fun on a movie.” And, indeed, there’s something very, very fun about this movie, even though, or especially since you sometimes find yourself rooting for the villain. Arnie is a bad guy, sure, but he’s also a tragic figure. He gets lost in his obsessions and madness.
Labels: cult movies film movie reviews