Turkish Star Wars: What Madness is This? 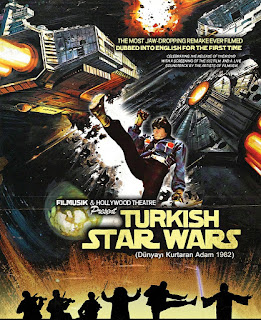 Remember as you watch Turkish Star Wars that the only limitations in film are dictated by budget and imagination. Not that there’s a ton of imagination here, but the thing has gumption, at least. Actually, Turkish Star Wars is the unofficial, affectionate title given to a 1982 film called The Man Who Saved the World. Quite blunt, that title, like the rest of the movie, but it makes its point. And the Star Wars connection? A bunch of footage, mostly cribbed from the Death Star battle scene at the end of A New Hope, used without permission, of course, at the beginning and end of the film. In between is one of the weirdest, most convoluted, most fun movies you’re likely to see. With all of the wall-to-wall action in this thing, it’s certainly not boring.

The movie opens with a long voice-over. Part of it is as follows: “Going into space, the space age begins.” Well yes, that’s kind of how it works. The rest of the narration, as well as the plot, is just as blunt and the story makes no sense. Something, something, the earth is blown up but maybe not blown up and something that looks quite a bit like the Death Star protects it and a weirdo called the Wizard can’t get through the thing because it’s imbued with the power, literal power in this case, of the human brain and now he has to acquire a human brain of his own to absorb its power and...well, you get it. It’s hard to tell at first, but when they cut from the stolen Star Wars footage and we see a pilot in the cockpit, you finally figure out that the good guys are in the Tie Fighters and the bad guys are in the X-Wings. Everything is vague. Nothing makes sense. Life is meaningless. And that is, I think, the crux of the movie.

Cüneyt Arkin plays Murat. At least that’s his character’s name according to IMDB. I had no idea Arkin’s character even had a name. I just called him Hero Guy. Gee, but he has a beautiful helmet of hair. Maybe to protect that brain the Wizard wants to get his weirdo hands on? Hero Guy’s partner, Ali, is played by Aytekin Akkaya. He’s Hero Guy’s supposed heterosexual life partner, but the amount of hetero between them is questionable. I mean, Ali keeps talking about his prowess with women, but he never gets any. Near the beginning of the film, Ali tells Hero Guy that he can whistle a special kind of tune that will bring all the girls in the area running their way. And so he whistles, and it’s a weird and annoying thing, but instead of women, a bunch of men in skeleton pajamas come to attack them. Shit. Well, I guess even the best laid plans, eh? Further proof that Ali might not know what he’s doing with the ladies comes when the Wizard’s wife tries to seduce him, but he freaks out like a weirdo schoolboy. Nothing wrong with being gay, of course, and someone should let Hero Guy know that constantly complimenting his male companion’s looks, and fawning over his tales about the women in his life, is a clear sign that he’s in love with the guy.

This thing is wall to wall action and insane explosions. The editing is headachingly fast and weird psychedelic colors and no-budget animation are thrown in for good measure. Oddly, the filmmakers have no problem showing children getting killed and bloodied. There’s even a scene where the Wizard sucks blood from a kind of plastic silly straw out of the kids’ heads. It’s a weird juxtaposition with over the top Keystone Kops-type violence. But nothing, not even a consistent tone, is sacred here.

And what of our villain, the Wizard? Wearing a weird helmet that appears ribbed for her pleasure, he claims he has unlimited magical powers, but is constantly getting his ass handed to him. He needs a human brain, sure, but why not just use magic to get it? The guy’s either a fool or a terrible magician. Perhaps both. Probably both. And the monsters and such that are attacking the heroes? They’re wearing pajamas. I mean, that’s what it looks like. Or bear suits with the colors changed. Goddamn, this movie was a blast.

Hero Guy has a love interest! And she’s a woman! But she can’t talk. They just stare uncomfortably at each other for long periods of time. But then she can talk a little bit as the movie progresses because it turns out that she had taken a vow of silence to protect an ancient sword and a kind of shrunken grey brain in a box that Hero Guy has to retrieve in order to defeat the Wizard. She’s beautiful. And she’s really good at staring at Hero Guy as if she’s in love with him, even after she’s only known him for a few minutes.

Side note: did you know you can melt a magic sword and brain together in a vat of some sort and turn the concoction into magic gloves with which you can defeat your mortal enemies? You learned something today. You can thank me later.


Maybe I’m reaching a bit too much here, but the whole thing is kind of like a cutup experiment, the kind of thing advocated and practiced by William S. Burroughs and Brion Gysin, in which texts from different artists are combined with others to create a wholly original work. Do I think this was director Çetin Inanç’s intention? Uh, no. I think he just did what he needed to do to make his movie. Still, there is a sort of comment being made here on the sort of authorlessness of a work of art once it’s released and becomes a part of the public consciousness. I mean, Star Wars and the various films from which the movie’s soundtrack “borrows” were being bootlegged like crazy in Turkey anyway, and it’s not like George Lucas and company needed the income. So why not? Nobody’s going to confuse Star Wars and Turkish Star Wars. In the end, I don’t know, maybe the entire purpose of human existence is to make weird movies and expand our consciousness until we become interdimensional beings and merge with the Great Goo. It’s as reasonable an explanation as anything else.
Labels: cult movies movie reviews movies