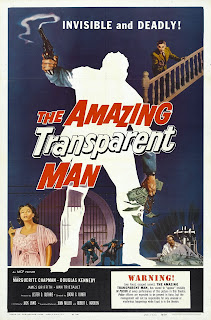 Well, yes, so of all the Invisible Man ripoffs, The Amazing Transparent Man is...one of them. Directed by pulp-maestro Edgar G. Ulmer from a script by Jack Lewis and starring Douglas Kennedy, The Amazing Transparent Man has everything you want in a movie. Well, provided that what you want is a movie with disappearing gerbils, a lot of bad invisibility stunts, bad acting, and a silly plot. Well, that’s usually what I want out of a movie. But I don’t exactly have my finger on the pop culture pulse.

Douglas Kennedy, a prolific character actor, plays Joey Faust, a safecracker busted out of prison by one Major Paul Krenner (James Griffith) so that Krenner can get his evil German doctor to experiment on Faust, turning him invisible. And to what end? Well, ultimately Krenner wants to build an army of invisible men. But first, funding! So yeah, Joey the safecracker has to crack some safes while invisible.

Laura Matson (Marguerite Chapman) is the ostensible love interest. She taught me something important: If you’re attractive enough, you can get through a police barricade with the exact convict the cops are looking for simply by batting your eyes a little and saying that the fellow in your passenger seat is your husband and he’s drunk. Te-he. Nothing to worry about here, officer. Nothing at all.

Oh yeah, the German scientist. Of course he’s German, right? And the movie really veers into fucked up territory with the good German doctor when he admits to Faust that he escaped Germany after being forced to experiment on his own wife in a concentration camp. He didn’t know what he was doing at the time because all of the patients were underneath a hood. Still…

You know, Douglas Kennedy isn’t a bad actor, unlike most of his supporting cast. His character is just in the wrong movie. The fedora-wearing fella should be in a low-budget noir of some sort. He is, after all, a bargain, very bargain, Bogart.

As you might expect from a movie made in a week or less, everything is a bit sloppy and haphazard. The lab is so cheap looking, it’s hilarious. But it’s charming in a “my kid built this” kind of way. Also, it’s always nice to see a guinea pig make an appearance, no matter the movie. When the animal is made invisible by the German scientist as a means of convincing Faust that his technique works, the actors don’t do such a convincing job pretending to pet the thing. Also, yeah, the floating bags of money during the bank robbery scene are clearly, so clearly, held up with wire. Everything comes off as a sort of backyard home movie, which, I think, makes the movie all the more charming. Plus, everyone needs money. No shame in doing what you need to do to put food on the table.

Still, considering they probably only had one take for everything, the direction isn’t bad. The errors aren’t too glaring. The scenes have a little bit of coverage, mostly cutaways. Though, as you’d expect, master shots are used a lot. Probably the funniest cutaways come when Laura Matson is driving Faust around in her convertible, having a conversation with him while he’s invisible. Whenever Faust is talking, the camera cuts to an empty seat, with the scenery zooming by in the background, and a bad voice over. Excellent!

Hey, but the movie has a message! I guess. Something about nuclear experiments and the Cold War arms race and...well, if you’re into this thing for a message, you should probably pick a different flick.
Labels: cult movies film movie reviews movies