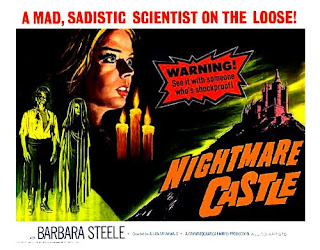 Nightmare Castle, a weird giallo gothic horror from Italy (Weird? Italy? Everything makes sense now…) was directed by Mario Caianno, a prolific filmmaker with credits dating from the early 60’s to the early 2000’s. It stars Barbara Steele, also prolific and working to this day. Her career started in 1956. A scream queen, yes, and British, too, but somehow never ended up working for Hammer Films, as one might have expected. She was in a Roger Corman flick, The Pit and the Pendulum, though, so I guess that makes up for it. Nightmare Castle, released in 1965, belongs mostly to Caianno and Steele, although all the performances are fine and the cinematography is quite good, especially for a low budget flick like this.

The movie begins with the evil Dr. Stephen Arrowsmith (Paul Muller) and his wife Muriel (Barbara Steele) hanging out in their giant castle as Stephen is about to leave for an important sciency-type trip. Already we know he’s evil because Muriel is going on about some sort of experiment Stephen was working on where a bunch of frogs ended up having to be destroyed. Yikes. It’s also in this scene where we’re introduced to Solange (Helga Liné). Old and ugly (made ugly by some pretty cool makeup with which it looks as though she has weird sores all over her face), but also the real love of Stephen’s life. Don’t worry, though, Stephen’s going to fix the whole ugly situation. Can’t have an ugly mistress, after all. The man has a reputation to uphold.

It’s apparent within about five minutes that almost everyone in this movie is totally evil or a cad. As soon as Stephen leaves (or appears to leave since it’s a fakeout) the castle, Muriel starts to get hot and heavy with with their gardener. He’s a peasant, so of course he’s an idiot, right? Right. Well, at least he’s a good kisser. The gardner is a big brute of a man, but somehow Stephen is able to knock him out with a blow to the head and chain him, along with Muriel, up in the basement dungeon. Why do these old castles always have a dungeon with chains that come out of the walls to hold prisoners? Well, shit, who knows. But the good doctor makes good use of it by torturing his wife and her lover and bragging about how he’s going to inherit all of her money. But, just to spite the guy, Muriel has changed her will so that all the cold hard cash will go to her “simpering idiot” of a sister, Jenny. A side note: Muriel hates Jenny for some reason I can’t fathom. She’s got some mental problems and lives in an institution, but Jenny will turn out to be the nicest, most morally pure character in the movie. I guess all that being kind to people can get aggravating.

Poor Jenny. She can’t catch a break. After the good doctor kills Muriel and her lover with acid, drains all of Muriel’s blood and puts her heart in a glass box, he decides to rescue Jenny (also played by Barbara Steele) from the asylum and marry her. Not because she’s kind and a stunning beauty but because of the money, of course. Stephen’s plan is to feed Muriel plenty of hallucinogens and get her declared incompetent. Stephen will then be in charge of her affairs and will have access to all that cold hard cash that he and Solange so crave.

Oh yes, and Stephen is able to cure that whole ugliness thing that Solange has going on. It all has something to do with draining all of Muriel’s blood and transferring it to Solange, while also keeping Muriel’s heart in a glass case. I don’t know, doesn’t make too much sense, but whatever, the good doctor is a man of science, and who are we to argue with that?

Okay, so you’ve probably gathered that the story doesn’t make much sense, and this is true, but this is giallo we’re talking about. Plot is generally one of the least important parts of the enterprise. It’s all about atmosphere. Ideas, if they are there at all, come far second. This kind of movie will tickle anyone who realizes, and odd that this might come as an epiphany, that films are composed of images and, if needed, sound. Everything else follows. Some might dismissively call this kind of thing all style or only style or something like that. I’m reminded of the very mainstream debate recently over Batman v Superman: Dawn of Justice. The complaints mainly focused on the muddled story and complete focus on style. This is exactly why I loved the film. The story is there to prop the style, instead of the other way around. Visuals and sound. Moviemaking. That’s what’s so wonderful about giallo in general, and certainly Nightmare Castle is a wonderful early example of the genre.

And so what of the visuals? Balancing the desire to make an interesting looking movie with the fact that there was very little money or time for that kind of thing, Caianno makes use of two shots quite a bit, but uses stylistic flourishes like high and low angled shots when they’re needed for emphasis. Caianno goes all out during the scene where Jenny, possessed by the ghost of her sister and has crazy hallucinations about Muriel, the gardener, and the professor. Very surreal stuff, very intense. The only real point in the movie that might actually scare a modern audience. At one point Caianno drapes some sort of cloth over Paul Muller’s head so that he looks like some sort of faceless demon and the whole thing is quite freaky, indeed. Giallo movies are full of brief hallucinatory scenes like this, and Nightmare Castle is giallo from beginning to end.