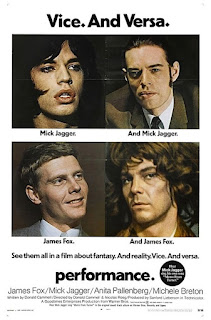 According to Erving Goffman’s theory of dramaturgy, everyday human interactions are a kind of performance. An individual’s personality changes based on the situation, context, relationship to the person being interacted with, etc. Donald Cammell and Nicolas Roeg’s film, Performance, shot in 1968 and released in 1970, is an extreme but extremely effective illustration of dramaturgy at work.
Performance was the first film as a director for Donald Cammell, who also wrote the script. (One of many rumors about the film holds that the script was co-written by co-star Anita Pallenberg, though she wasn’t credited.) It was also the first time at the helm for Nicolas Roeg, who was brought on as co-director because, though Cammell was good with directing actors, he needed help with the look of the film. Because Roeg had twenty years of experience as a camera operator and director of photography (including second unit work on Lawrence of Arabia), the movie looks amazing. The color palette is always vivid, especially the reds, which nobody except perhaps Argento would later use as effectively.
The film opens with quick shots of rockets exploding in the air followed by an overhead shot of a chauffeur driven car, which is intercut with Chaz (James Fox), who we’ll soon find out is a brutal, terrifying enforcer for a ruthless gang boss, having rough sex with a beautiful woman in his London apartment. Chaz, a former prizefighter, lives in a world of unbridled masculinity and unquestioned heterosexuality, and he takes this role very seriously. Chaz is so hyper-masculine, in fact, that he actually loves the brutality of his job. Early on, we’re treated to a montage of several scenes wherein Chaz shakes down people who have crossed his boss Harry Flowers (Johnny Shannon) in one way or another. In one particularly memorable scene, Chaz is shaving a limo driver’s head while a couple other goons pour acid on the car, ruining it. Chaz momentarily considers pouring some of the acid on the limo driver’s head, but the goons remind him that they only have enough for the car. Chaz casually figures maybe next time. There’s a weird professionalism about the scene and even if there’s a cynical sarcasm when Chaz tells the goons, who are helping Chaz put shaving cream on the poor bastard’s head, “No soap on the gentleman’s collar,” the goons obey him. The role of a professional, someone who is by the book, even if that book is quite askew, is something that Chaz takes great pride in.

But Chaz’s professionalism gets tested when Flowers sets his sights on acquiring a gambling business owned by Chaz’s former childhood friend and later boxing rival Joey Maddox (Anthony Valentine). Even after viewing the film twice, I’m not quite sure what happened between Chaz and Joey, except that probably Joey beat Chaz in a boxing match, and maybe he cheated. It’s kind of vague, like a lot of the movie. Anyway, the point is that Chaz really, really dislikes Joey, and Flowers realizes that this is going to be way too personal for Chaz and tells him to sit this one out. But Chaz just can’t keep out of it. When Chaz goes rogue and pays a visit to Joey, we get the first hint of Chaz as a person who’s capable of going beyond his strict social roles. His ego overwhelms his otherwise very strong impulse toward conformity.

Chaz’s confrontation with Joey goes about as well as you might expect, with Flowers chastising him and giving the nod to Joey to exact revenge. Ambushed by a couple of Joey’s guys and stripped down to his underwear and whipped with a belt, not only is Chaz beaten, but the masochistic act is a direct challenge to his masculinity. To really drive the point home, Roeg and Cammell intercut the belt whips with pictures that Chaz has of himself in various places around his apartment: pictures of shirtless Chaz, of Chaz in a fighting stance with boxing tape around his hands. Quite heavy-handed, yes, but it does the trick. Chaz’s hypermasculinity is perhaps the biggest put-on in his life.

Chaz, always good at what he does, manages to trick Joey’s goons into thinking he’s passed out and then overpowers them. Quickly dispensing with the goons, he points his gun at Joey and says one of my favorite lines in a highly quotable film, “I am a bullet,” and fires. I don’t know exactly what’s meant by this, if indeed anything concrete is actually implied, except perhaps that Chaz has fully and enthusiastically taken on another role: that of the total embodiment of violence and revenge.

So all this business of killing one of his gangster boss’s associates certainly isn’t good for Chaz. He’s certain he’s a dead man, so he mixes toothpaste and red paint and puts the gunk in his hair to disguise himself as a redhead and thinks about getting out of town, but at the train station, he hears a guy talking about a basement room in an old mansion that’s just become available. The building is owned by a guy named Turner (Mick Jagger), a famous musician who hasn’t released any new music in years. Chaz figures that this vacated room might be a good place to lay low while he gets a friend of his to retrieve some cash he’s saved up, so that he can get a fake passport and get the hell out of the country. In order to fit in with the “bohemian” atmosphere, Chaz poses as a juggler, a ruse that Turner and his two female companions immediately see through.

From there, the movie really kicks into its exploration of roles and rules, gender fluidity and sexual politics. Where does one person’s performance and the other’s begin? That kind of thing. Pherber (Anita Pallenberg), a stunning blonde, very feminine, is Turner’s main companion while Lucy (Michèle Breton) is a kind of free spirited hippie who seems to have kind of wandered into the scene. Lucy is interesting because, in addition to being quite beautiful, she’s Jagger’s doppleganger. She looks like him, her body is as boyish as his is girlish. She is as masculine as he is feminine. Turner is the one who wears makeup, while Lucy wears none. This was all pretty extreme as far as late 60’s identity politics went. Pherber explains Jagger’s Turner quite concisely when she says, “He’s a man, a male and female man.” Pherber sees this as the only authentic way to live, to not deny any portion of your personality. But, of course, Turner’s act is just as self-conscious as Chaz’s hyper-masculine stance. It’s the kind of thing that gives him a mystery, a power, especially over women.

In the climax of the movie, Pherber and Turner feed Chaz mushrooms without him knowing at first, only telling him when he’s deep into his trip, and it’s here where Chaz’s personality totally breaks down and something he said to Turner the day before, “I’ve got to fit in, Mr. Turner,” is amped up and he fits in by becoming, for one night at least, a member of bohemia, something he had despised only hours before. Pherber and Turner begin by taking the polaroid that Chaz will need for his fake passport. But they make the pictures intentionally artsy, really just to fuck with him. They dress him up as a noirish gangster, make double exposures on the film. When Chaz says that he just needs a regular photo, Turner replies, “What photo, of who?” which is really the crux of things. Which Chaz? Which Turner? Which Pherber? Is it all a performance or can we find something authentic underneath, at the base of things. Is there a “real” Chaz? Is there a “real” Turner?

The movie doesn’t answer this question, but it seems to weigh heavily on the side of yes, there is a sort of  “authentic” self but it’s a deeply buried thing. The movie seems at least on the verge of arguing that personality is always situational, that people are never really themselves, never simply masculine, never simply feminine, perhaps paradoxically, never simply androgynous either. But it also argues the opposite: that there is an authentic self to be found somewhere in the unconscious mind.

By the end of the film, both Turner and Chaz seem to respect each other’s performance, and perhaps even understand each other a bit. Androgynous Lucy, who loathed Chaz the gangster, slips into his bed after he’s coming down from his mushroom trip, but at first it’s Turner getting into bed with Chaz. For no more than a second and a half, we see Turner get into bed with Chaz, but when Chaz turns around to see who got into bed with him, and it’s Lucy. The transition from Turner to Lucy is seamless. Not only do Michèle Breton and Mick Jagger look so much alike, but the scene is editing in a way that the audience is actually surprised by the transition. Chaz even mentions that her skinny frame and her small breasts make her look like a boy, but whereas he might have reacted to that violently in the past, he’s very matter of fact about the observation now.
For whatever reason, Performance is almost as well known for the legend that surrounds it as the film itself. Unfortunately, much of the rumors and controversy surrounds lead actress Anita Pallenberg, who had a long association with the Rolling Stones. She was a model who first dated Brian Jones, but left him for Keith Richards after Jones became physically abusive. In Richards’ autobiography, Life, Richards wrote that Jagger and Pallenberg had an affair during the shooting of Performance. For her part, Pallenberg denies the affair. There have also been rumors that Jagger and Pallenberg actually had sex while filming their scenes, but no footage of this has surfaced.

One of the stranger parts of the Performance mythos is the story of Michèle Breton, who played Lucy. Performance is the last of three film credits for her, though if you blink, you’ll miss her in Jean Luc Goddard’s Weekend. Essentially this was her only feature film role with any meat to it. Her role as Jagger’s female doppelganger is small but very important. A teenage runaway, Breton was heavy into drugs. Living in Kabul some time after filming Performance, it was there that she finally quit drugs, after a bad LSD trip. She was alive at least until 1982, when Mick Brown tracked her down for his book Performance: A - Z. She was living in Berlin. After that, who knows. I couldn’t find an obituary for her, so one assumes she’s still alive. Whatever happened, her story is that of someone whose star shone brightly for a very short time and then quickly flickered out. But what a star, what a light.