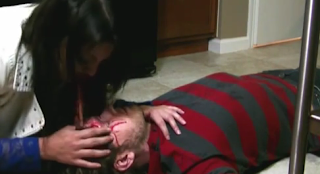 Brains! (My B.F. Freddy) is a funny, lovingly-made tribute to the campy horror movies that many of us grew up on in the 1980's. The flick opens with writer/director Jaime Miller getting a series of spooky prank calls. Who can it be? "But it was just a B movie!" the voice on the other end of the line says, and then the hilarity really begins.

There's plenty of campy gore, monsters and even a zombie band, in which my old friend Ben Gallaway plays one of the guitar players. Take note: his official credit is "Scantily Clad 'Flea' Zombie." The other guitar player in the group, played by Jaime's husband Peter (who also helped with the special effects) is listed as "Cobain" Zombie. Hey, take this as a warning! Okay? Good. Let's go...

Jaime and Peter wrote the song about a year ago. I believe that one day it will replace "Monster Mash" as the ultimate Halloween novelty song. I mean, I don't want to overplay things here, but if Shakespeare wrote songs, they would sound like this one. Okay, maybe that was a bit much. Anyway, Jaime has a very pleasant voice and Peter provides some damn catchy beats and backing vocals. You'll love it. I promise.

To me, the coolest thing about this video is that Jaime and Peter learned all this stuff, including the makeup and effects, in about a month. Maybe even less. I remember them posting a message on Facebook asking for a videographer. And then a few days later, they announced they were going to do everything themselves. That's the right attitude, folks, and it really paid off!