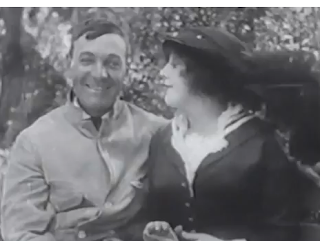 Like a sitcom that features a guest appearance by a sports hero from the NBA or NFL, "The Speed Kings" features famous auto racers from the early 20th Century. (It was released in 1913.) Luckily these films were silent, so you didn't have to hear the racers speak, avoiding the stops, stutters and general awkwardness we're forced to put up with today. "The Speed Kings" also features Ford Sterling as Mabel's creepy father, which is weird because Sterling plays Normand's creepy potential lover in "A Muddy Romance," which came out the same year. Yup. Mull on that one for a little while.