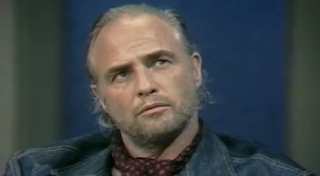 The Marlon Brando / Dick Cavett interview from 1973 is wonderful for a number of reasons, not the least of which is the way that Brando seems totally zoinked and in love with the complete importance of everything he has to say while feigning that he just doesn't care about these sorts of things. This show is just such a bizarre train wreck.

For me, though, the best part is where Brando basically calls out the entire talk show industry, saying it's a place that makes money off the humiliation of other people, all for the sake of a mindless beer-drinking audience who sit at home staring at their TV as a way of forgetting their mundane, useless lives. Not that he was totally wrong, of course. I'm just glad that we've come so far since then....

Man, you can almost see Brando doing air quotes when he tells Dick Cavett that he should be commended for trying to do shows that touch on serious issues. This little speech came just after Cavett had asked Brando whether it was true that he had once flung his own poo from a hotel balcony. Naturally, Cavett was quoting from another source, but, come on, if Cavett was really above this kind of salaciousness, he wouldn't have brought the poo topic up in the first place. My point, people, is that Dick Cavett obviously had a poo fetish.

I love the complete backhandedness of Brando's compliment. Basically, he tells the poor schmuck that his show rises slightly above the level of complete sewage (so to speak). And the audience applauds wildly. But of course.