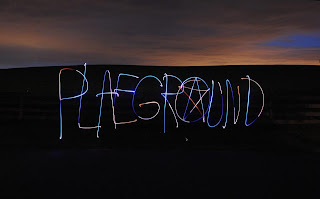 I hadn't heard of the group Plaeground until one half of the EDM combo, Will S, send me a cryptic Facebook message. It was just a link to their Soundcloud page and a smiley-face emoticon. OK, sure, why not? Then I looked at his profile picture. A bearded dude with dreadlocks. Nooo! Hippie music! But because I'm cool like that, I checked out their music anyway.

I liked the first few tracks I listened to on their Soundcloud page, but I'm more of an album kind of guy than an individual track (suit) fella. So I went to their Bandcamp page and downloaded their 2010 album, Electric Indian, Volume 2. It cost me free dollars, which, of course, meant that I didn't spend any cheddar on the thing. Which means that if you like their songs, there's really no reason not to download their tunes. And if you live in Maryland, you should consider seeing them live.

I say this because I really like their music. My idea of consciousness expansion lately has been cold fever dreams and night terrors. Which, oddly enough, is kind of what most of the tracks on this album remind me of.

It's pretty dark stuff. Thundering, industrial-sounding drums, effects that sound like they were lifted from a David Lynch movie, songs for the paranoid. That's what most of these tracks felt like. Take, for example, the vocal sample on "It's Raining Lazers." It's probably taken from a movie, though it's not one that I recognize right away. Anyway, it's the sound of a little girl saying, "I'm so sorry, Daddy. It'll be better next time."

Occasionally, you'll hear the tiny tinkle tinkling of little synthesized bells or even the sound of church bells. Which is a nice touch, because it tempers the dark, paranoid mood that these songs evoke. Also, all of these tracks you could dance to, if that's your thing.

This album does have one track, "Tree Of Love," that's just a really positive get-the-tribe-together dance song. It's fun, full of joy, and has plenty of manic Attention Deficit Disorder kind of danceability.  Actually, it's probably my favorite song on the album. Uh oh. Does that make me a hippie? Quick! Get me a hairbrush and a church suit, stat!