Dispatches From A Rodeo 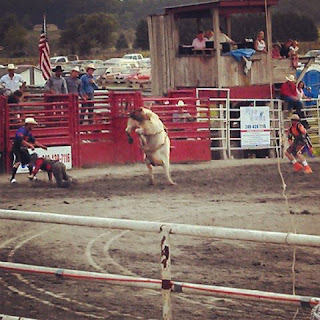 
On a lark, the wife and I went to the J Bar W Ranch for a rodeo. Saturday, July 20th, 2013. The ranch is about twenty minutes northeast from our apartment in Frederick, MD.


The spectacle fascinated me. It was completely engrossing. At times I felt guilty about how entertaining I found the whole thing. Whenever a rider mounted a bull, there was always a chance they might die trying to ride the thing, however slight. The spectre of death haunted this family-friendly event. They didn’t sell booze. The announcer didn’t curse. There were children everywhere, clapping and cheering. Late in the evening, a bull fell over, crushing a cowboy under its weight. He lay in the dirt, completely unconscious. The other cowboys jumped in to help. On the benches behind us were two kids who couldn’t have been older than seven. They were laughing and pointing at the gruesome scene. Where were their parents?


There are two fundamentally opposing elements here - the bulls are tamed, but only enough that the audience can revel in the wildness. They buck the riders off and then run around the arena until they’re either roped in or chased out. We love to see them get angry, crazy, mad and dangerous. But we’re also glad that they’re penned in. We sit on bleachers and drink our sodas and eat our cheeseburgers, happy that there’s violence, but also glad that it’s contained.


Those fucking cheeseburgers! My wife and I were farting all night.


Someone had gone out into the field the ranch was using as a parking lot and flyered the cars with KKK recruitment material. The announcer made sure to denounce whoever was responsible. “There’s too much of this stuff going around,” he said. It wasn’t the most diverse event I’ve ever been to, but there was an African American cowboy and at least two Latinos. Besides, the whole bullriding thing came to the U.S. from Mexico. But then, racists aren’t usually bright about things like history, anyway.

It’s hilarious watching an angry bull chasing after a guy on a four-wheeler. Doesn’t the beast understand it’s supposed to be the other way around?
Labels: Dispatches From