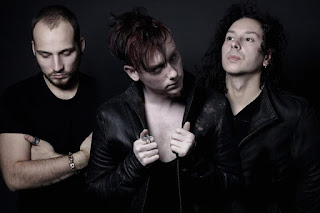 While it's true that the band Nursing Home is heavily rooted in darker electro-based rock from the 90's (bands like Orgy and Mindless Self Indulgence come to mind), they're unique enough to firmly place them in the 21st Century. But that's kind of an odd quirk we have about rock-n-roll, isn't it? Nobody would say to a bluesman that his stuff reminds them of the kind of blues people were playing only fifteen years ago. But with rock and other forms of popular music, ten years on and a certain sound is considered ancient, a freakin' relic. Rock people have really lost their concept of Cosmic Time. A sad thought, indeed.

This self-titled debut album includes four songs and a short intro track. It's got a slower tempo than you might expect from this kind of music. It's appropriate, though, considering the themes on the album. Characters sludging through a drug-fueled life, the horror of the everyday. Life creaking along, slowly, slowly. A very nice artistic choice. Lyrics like "cocaine cliche," "I don't like the world I see," and "finally found the bottom of the rock," give you some idea of the kind of material we're talking about here. If you're familiar with Nine Inch Nails, Skinny Puppy, Bile, etc, you know how gloomy this kind of stuff can get. If you always need your music to be sunshine and unicorns, avoid this album at all costs.

These guys really remind me of the kind of music I was listening to during my wayward youth, and for that reason alone they can do no wrong. Don't misunderstand me, I'm glad that my musical tastes have expanded in the last fifteen years or so, but it's a good thing to be reminded every once in a while that all ain't right with the world and there are people who are genuinely suffering through the experience. There is a strange kind of beauty in this kind of gloom, which is something I've never quite been able to understand the reason behind. Maybe I should ask my psychiatrist.

My favorite tracks were the first two. "Car Crash Life," in particular would make a great alternative radio anthem. "It's so nice / Living in a car crash life," goes the chorus, absolutely soaked in irony. Like I said, beauty in darkness. And these guys have it.

I'll definitely be following these guys down the road. Maybe I'll catch a show next time I'm in Brooklyn. I'm excited to see what they can do with a full-length album.