Revenge Of The Mullet People 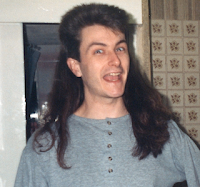 By the age of thirteen, I had matured into a fully-functional cyborg entity named the Crystaline Cupcake. I was supposed to be programmed to keep America safe from the Mole People. Turns out there was a mix up at the factory and I was actually programmed to destroy all the mullet people. As a result, the entire town of Corner, Alabama was wiped off the map.

Well, either way, I was good at my job. Too good. They found me, man. Drink your milk, kids, but sometimes even strong bones will only get you so far in this world. Nothing can protect you from the foul stench of a Muskrat Bomb. You can't wash the smell away, even if you use plenty of SPAM. It's there forever. You'll never have friends again. Only ostriches will accept your company, and then only after you've given them a perm and loaned them the first season of 21 Jump Street. They think that Johnny Depp guy is just oh so dreamy. And who can blame them?

I just can't rid myself of the desire to destroy mullets. I have my scissors at the ready. I linger, sad and despondent, outside monster truck rallies, Lynyrd Skynyrd concerts and Waffle Houses all over this great nation of ours. I've even considered visiting my Aunt Betty in that women's prison. But it's no good. I have Muskrat Bomb flashbacks. Every time I hear someone fart, I take cover immediately. I live in the shadow of despair. My soul weeps.