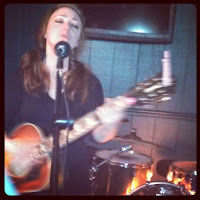 Anyone who’s been following my writing for any amount of time (Hi Mom! Hi, Aunt Jenny!) knows that Rachel Brooke is one of my favorite traditional country and blues artists. You can find a few album reviews I’ve done here, here and here. I love her music.

I’ve only lived in Frederick, Maryland since November of last year, when my wife and I decided to move out of Baltimore so we could get away from the city. Consequently, this way my first time at Guido’s, a little dive bar with a small performance space in the back. It’s the kind of place that could have been described as smoke-filled had it not been for Maryland’s indoor smoking ban a few years ago. It’s a club for the dregs of this town. I was going to fit right in.

I was actually mildly surprised that Rachel was playing a venue so small. After all, she’s pretty much a household name among fans of underground country. She’s been written about numerous times on sites like Saving Country Music and CMT Edge. No matter, though. I was glad to get to see her. And my dumbass nearly missed the show, too. I looked over her tour dates a ways back and could have sworn that I didn’t see a stop in Maryland. Consequently, I didn’t know about the show until I got off work Saturday afternoon and saw a Facebook announcement. I’m glad I made it. The show was awesome.

There were two openers: The Galt Line and Laura Mae Socks. The Galt Line are a local duo that play classic country, mostly honky tonk. Blythe Crawford played the bass, sang and kept the beat with this tambourine gizmo that was strapped to her ankles. Willie Gammell played the guitar. The Galt Line was a really solid band and I look forward to seeing them around town again.

Laura Mae Socks came all the way from Louisiana.  She also played a classic country / traditional style. She had borrowed a local fiddle player and upright bass player for this stop on her tour. Though they only had two days to learn her songs, both of them did a great job.

This latest tour was Brooke’s first with a three-piece band behind her. They were a tight band, never missing a note. This was Brooke’s second to last stop on her tour, so the performance was by now second nature, if it hadn’t been already.

Brooke’s music is both nostalgic and firmly rooted in the present. Listening to her music live is like being in two time periods at once. On one hand, you’re certainly aware of your surroundings, and that you’re not, in fact, in an old nightclub during the 40’s. On the other hand, when you really lose yourself in the music, you do, in a sense, feel as if you’re not really in the present, either. Such is the magic of Rachel Brooke’s music. I would have been absolutely lost in it, had I not also been taking notes.

Brooke had a great connection with the audience. In introducing her song “Fox In A Hen House” she said, “This one’s for the sleazos. Which is probably all of us.” Indeed. And after singing “Late Night Lover” she said, “That was...appropriately sleazy. Just like us!”

In the middle of the set she gave the band a break and went completely solo, just her and her guitar. Along with a couple original tunes, she also covered Hank Williams’ “Old Log Train” and the Carter Family’s “My Dixie Darling.” The Carter Family tune was actually a request. Brooke said she’d never played the song in public before, but I don’t think anyone would have figured it out if she hadn’t told us. I closed my eyes and could have sworn I heard ol’ Maybelle Carter strumming her guitar as Rachel sang. The Ghosts of Sara and A.P. Carter, those doomed lovers, were somewhere in the room, too.

When the band came back she played four or five more songs, including one of my favorites, “Must Be Something In The Water.” I wasn’t aware that part of the song had come from an old Bessie Smith tune called “Careless Love.” Maybe it was on the CD liner notes, but I usually just buy digital copies these days. I should probably start buying the CDs from now on.

Rachel and her band closed the show, appropriately enough, with “Goodnight Irene.” A few people sang along, more or less drunkenly. Hell of a show, this one. I’m glad I got to see it.
Labels: country music music