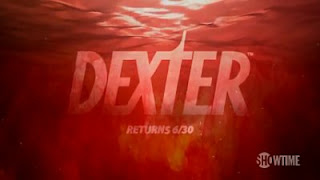 Showtime has just released a short scene from season eight of Dexter which shows that Deb is not taking this “killing of an innocent person” thing too well. The person who’s dead is, of course, Captain Maria LaGuerta, her former boss and the woman who almost brought Dexter to justice.

Season seven was a return to form for the series, which had two lackluster and fairly boring seasons preceding it. Seasons one, two, four and seven were packed with tension and unexpected twists, possibly the most startling of which was the death of Dexter’s wife at the end of season four. The show’s writers already had a two-season story arc planned when they went into last year’s seventh season. There’s no reason to suspect that this last season will be any less exciting.

I think the legacy of this show is going to be pretty mixed. For one thing, it really did go on too long. A very tight four or five seasons would have made for a nice character arc. The series was never open-ended. We always knew that some sort of terrible fate awaited Dexter. It was only a matter of how long the question would be dragged out. Turned out it was just a little too long.

The idea of a series where the hero is a sociopath serial killer who has learned to train himself to only hunt other sociopaths was a great concept, first appearing in Jeff Lindsay’s book Darkly Dreaming Dexter shortly before being developed for Showtime. Here’s hoping for a dark, tension-filled final season.