Death And The Possum 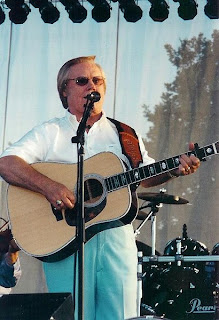 Driving home from work, thinking about that junky in my life and the pain he's causing everyone, but mostly just hoping he's not killing himself. Is it possible to be cursed? Is that a real thing? Listening to NPR, I hear that George Jones has just died. Naturally, they play "He Stopped Loving Her Today." A predictable choice, but it's a great song so why not. And there's everything going on. The junky and his wife getting their fix somewhere in Alabama, no contact with anyone but other junkies and then the chorus of the song begins to play and my eyes fill with tears. Stay focused. How to explain a grief-stricken car accident? Stay focused on the road ahead. Ah, but that song about unconditional love for someone who doesn't love you back and the Possum's voice reaching its emotional peak and now he's dead, though almost a miracle in itself he made it to 81 years. The news story's over. I switch to the pop music radio station. They're playing "Paint It Black" by the Rolling Stones. This station usually plays hits from the 1980's. I've never heard them play the Rolling Stones before. Why this song and why right now? It doesn't make any sense. But then a black bird and its companion fly past my windshield as I stop for a traffic light. I-70 just ahead. I can see those familiar mountains in the distance, the beginnings of Appalachia. They seem to be calling me home.