The Other Life, By Shooter Jennings: A Review 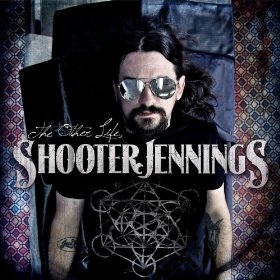 The Other Life is Shooter Jennings’ best album. Last year’s Family Man album was very good and at first I wasn’t sure which one was better. In the end, I think the songwriting on this record is just a bit more solid.

Like Family Man, this album is autobiographical. Whereas the last record explored unity, kinship and things larger than the individual, The Other Life goes in the complete opposite direction. It explores alienation and the nature of the outsider. As you might suspect, the album’s tone is quite dark. And although some of these songs are on the very edge of what you could reasonably call country music, its roots lie in the country soul and dark pathos exemplified by artists like George Jones and David Allan Coe. Just like Shooter Jennings, there have always been a few country artists who aren’t afraid to look into the dark side of the human soul.

The album opens with “Flying Saucer Song.” A spooky piano solo plays just to the edge of tedious and lets us know right from the start that we’re going to be dealing with some strange, gothic sounds and themes on this album. Then there’s a kind of Pink Floyd incantation, “Do you know who you are?” It’s a question that’s not so much addressed to the audience. This is the question that will inform the rest of the songs on this album.

“Hard Lesson To Learn” is a nice honky tonk tune about Shooter’s country music heroes and some of the mistakes they’ve made along the way. The chorus, “Same old bottle / Same old blues / Same old lesson to learn,” sums the song up nicely. It also reminds the listener of the deeply personal nature of this album.

“The White Trash Song” is a cool Steve Young cover. It’s the best kind of country soul and hillbilly blues. Which makes it the perfect song for Scott H. Biram to lend his vocals talents. The fiddle playing and steam train drum beat are absolutely perfect.

Next we have “Wild And Lonesome,” the first of the great ballads on this album. On this record and the last, Shooter Jennings has been at his best when he slows the pace a little, and this song is no exception. The next track, “Outlaw You” was released as a single early last year, before the Family Man album came out. A lot of folks figured this song would appear on that album. And maybe Shooter did too, at first. This song works better on this album anyway, fitting in nicely with the introspective theme. The song is about the recent trend of record labels calling some of their pop country acts outlaws in an effort to increase record sales. Shooter sings about the history of the movement that his dad helped to invent and calls today’s “outlaws” out as nothing more than corporate stooges.

“The Other Life” is the second great ballad on the album. It’s mostly Shooter at the piano, soulfully singing about how he was born into a kind of rebelliousness and alienation from mainstream society. Besides “The Gunslinger,” this is perhaps the song that most exemplifies the existential otherness that Shooter explores on this album. You won’t find anything this raw on commercial country radio, that’s for sure.

“The Other Life” is followed by two uptempo Southern rock influenced tunes. The first, “The Low Road” is the song where Shooter distills the essence of a rebellious spirit. Sometimes we have to break the rules to stay true to ourselves and our moral compass. This is illustrated in the song’s opening, were Shooter sings about being bullied to the point where he hit the kid in the teeth with this Skeletor lunchbox. “The Low Road” is a nice anthem for the alienated. “Mama, It’s Just My Medicine” is the second of the two Southern rock songs. It’s a fun song, but possibly the weakest of the album.

“The Outsider” is a classic country tune that would work well as a Guy Clark or Jerry Jeff Walker song. This song also has one of my favorite lines: “A bitter kiss has been bestowed / upon the son of a rebel saint.” Yes! Almost all you could say about being the son of a country music legend is right there. The kiss of good fortune, being born into a career where you have opportunities and connections that others don’t, along with the bitterness of being constantly compared to your father. A hell of an albatross, that one. People are always going to doubt whether you deserve to be where you are. As if this life is even remotely fair.

“15 Million Light Years Away” argues that the outsider / outlaw is the sanest madman in a cruelly insane world. The song features Black Oak Arkansas’ Jim Dandy, who adds a sort of witchcraft blues voice to this odd piece.

“The Gunslinger” closes the album. Among a host of great tracks, this one is my favorite. It’s a crazed, barbaric howl of existential pain. Shooter really takes us into the depths of darkness on this one, exploring his feelings of pain and revenge. As the guitar and saxaphone reach a maddening crescendo at the end of the song, it leads the listener to  incredible emotional depths. It becomes almost too much. But then, finally, the song slows and everything becomes quiet.  Then the last track bleeds back into the first song and we realize that the nightmare isn’t quite over.
Labels: country music music