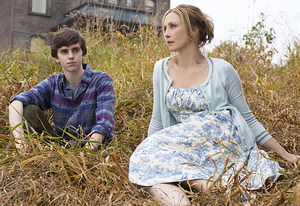 The show opens with Norman and his blonde crush, Bradley (she’s a girl, just has a boy’s name), witnessing a car accident while they wait for the morning school bus. They find Bradley’s father inside, his body a charred mess. Someone lit him on fire and locked him in his own car. Hoo-kay. We don’t hear much more about the incident in this episode. It’s just one of many plot threads that are introduced.

Other plot threads include the introduction of Norman’s half-brother, Dylan (Max Thieriot), and a possible Chinese sex slavery ring (?). We also find out that pretty much everyone in this little former logging town is part of a criminal enterprise or helping to keep those criminal activities a secret.

Interesting enough. So it looks like this is going to be a sort of working-class Twin Peaks, without the supernatural element (maybe?). Either way, there’s some cool mysteries to be solved over the course of the remaining eight episodes.

The half-brother angle is pretty interesting. At first, Dylan appears to be just a bullying twat. Which he is, though there’s a little more to the character. At the beginning of the episode we find him on Norma’s doorstep demanding to be let in because he’s broke and has nowhere to go. The only reason that he gives is that he’s family, and that’s what families do for each other. This is enough to convince Norma to let him stay for a while.

It’s clear that Dylan hates Norma, but what’s not clear is how much this hatred is justified. One thing is for sure, though: Dylan knows that the relationship between Norman and Norma isn’t healthy, and he lets his brother know in plenty of not-so-subtle ways. But we can’t really argue with the guy. This episode features a scene where Norma takes her shirt off in front of the boy. Norman can’t look away. The mixture of surprise and sexual excitement in that scene is pretty fucking creepy. Naturally, we’re going to have to see that issue slowly dragged out over the course of this season, next season, etc, etc.

The most interesting character in this series by far is Norma Bates. Vera Farmiga, a beautiful blonde in her early forties with an infectiously sweet smile, is absolutely perfect for this role. She’s really able to make us sympathize with her, and be repulsed by her, at the right moments. Norma’s probably killed her ex-husband and we know she killed her rapist (though who didn’t think that was justified?) and there’s clearly other sinister qualities about her yet to be revealed. But she’s also quite vulnerable and genuinely cares about her son. A little too much, sure, but still....

Vera Farminga is able to make us react exactly the way we’re supposed to in any given scene. We sympathize one moment and are repulsed by her the next. Watch this show if only for her performance.
Labels: television