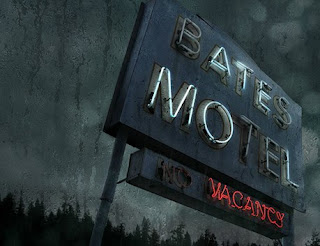 The first episode of Bates Motel provided a solid foundation for this new horror / thriller series from A&E. There were a few surprises and it was about as Oedipal as you’d expect.


Freddie Highmore, who you might remember as the cute kid from Finding Neverland and the cute kid from Charlie and the Chocolate Factory plays a teenage Norman Bates in this sort of prequel to the Alfred Hitchcock movie Psycho. I say “sort of” because this version has a contemporary setting, with cellphones and such. Budget issues? Anyway, it does get a little confusing because Norman and his mother Norma (Vera Farmiga) have a fashion sense that comes straight out of the early 1960’s. And, of course, the familiar motel and the creepy house old behind it look exactly like they do in the Hitchcock film. And yet, everything else is clearly from this era. It provides a weird but interesting contrast between the insular world Norman and his mother share, and everyone else.

The hotel is originally called the “Seafairer Motel” when Norma purchases it after the death of her husband, a death she might have had something to do with. Most of this episode takes place in the first few days after they’ve moved into the old house behind the hotel. There’s a new school, new teachers and a gaggle of squeaky girls that follow Norman around for some reason.

Man, oh freakin’ man, did they lay the Oedipal message on us. Yes, yes, we get it. Their relationship ain’t quite normal. But did there really need to be that scene at the end of the episode where Norman declares his undying love for his mother while they sit in a rowboat underneath the glistening moonlight? And this after they’ve just shared the intimate experience of dumping a dead body overboard?

Oh yes, the dead body. During the final third of the episode there was a pretty brutal rape scene. A redneck neighbor whose family had owned the motel for generations before it was forclosed on, sneaks into the house and rapes Norma in her kitchen. It’s an absolutely brutal scene, possibly pushing the boundaries of basic-cable decency. It only lasts for a few seconds, but it’s tormenting to watch. But Norman is there to rescue his mother, hitting the guy on the head with an iron, which allows Norma to grab a kitchen knife (a utensil which, you might recall, was featured fairly prominently in Psycho) and stab him about 47 times until he’s quite dead.

The rest of the episode focuses on the hiding and disposal of the body and the seemingly obligatory introduction of a suspicious cop. Also, in the last few minutes we’re introduced to a plot point where Norman discovers a journal containing drawings of a teenage girl being drugged and brutalized.

The first episode of Bates Motel was pretty solid. It wasn’t very creepy, but the rape scene was pretty shocking. Hopefully they’ll be a little more subtle with the Oedipal stuff as the season goes on. There’s some nice suspense and the episode was beautifully shot. I look forward to seeing where this goes.