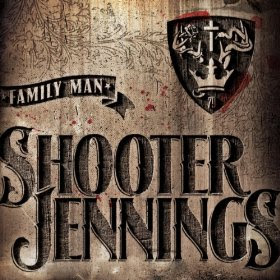 Shooter Jennings' new album, Family Man, blends the classic Southern Rock sound we've come to expect since Put the "O" Back in Country with acoustic sounds.  This is the first time that Jennings has really reached back to the folk roots of country music.

The first single, "The Deed and the Dollar," has a thumping Waylonesque bass line, along with Shooter on acoustic guitar.  It's a sweet, heartfelt, love song, but there's also a lot of playfulness, even some straight goofiness, with Jennings throwing in little Southernisms like "She's finer than a frog hair split four ways."  Before this track, there's a couple of rock songs, almost forgettable, the guitar solo by Tom Morello on the second track really not adding much.  This short album really hits its stride from "The Deed and the Dollar" on, combining Southern Rock and folk elements in some pretty interesting ways.  "Manifesto No. 4" has gospel-style vocals and heavy, rocking guitars.  "Daddy's Hands," recalls the early death of Waylon Jennings in a sweet and tender ballad about the pain of having to watch a husband and father decline during his last days.  "Black Dog" is a sort of rambling tune about a mining accident.  Interesting the first time, though I did skip it during later listens.

"Southern Family Anthem" has music bloggers talking, what with its references to incest and murder.  I liked the honesty of the song.  Whether the lyrics are true or not is hardly the point.  This tune is ultimately about unconditional love.

Family Man is a clunky album.  But it also might be Shooter Jennings' best.  He's got another album from the same recording sessions coming out later this year.  We'll see how it compares.