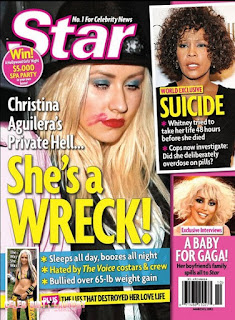 Star has once again sent its team of (on) crack reporters to dredge up the details of another major celebrity real estate investment.  It's nice to see a young person like Christina Aguilera concerned about her future.  Because, like most of us, she's going to hell.  Unlike most of us, she's rich, so she can afford a private hell.

It's interesting that she still has the money for such a big purchase.  We'd heard rumors that her savings were wiped out when she invested in conceptual artist Mrogbot Celciuses' attempt to build the world's largest imaginary friend.  Which explains why, just months after Celciuses took her money and disappeared to the planet Zygotron, Aguilera released a Christmas CD.  "Jiggle Your Raspberry Dome," the first single off the album Jesus Was My Kinda Playa was a flop, though it did become quite popular with construction workers who wear nudie suits.

Who knows?  Maybe she had just enough cash tucked away somewhere.  Most of the top brass here at the Mugwump Corporation have reserved their own private hells.  They know how expensive it is.  Worth it?  Of course.  They know they're going to have their balls smashed by walruses, but who wants witnesses?  Unfortunately for this lowly reporter, afterlife insurance isn't included in our benefits package.

Remember, kids, save your money.  You're probably going to hell.  Do you really want to suffer with all the common people?
Labels: humor satire