This Week In Food


I think we all know who Paula Deen is. That chubby old Southern lady on that cooking show with the unimaginative Southern foods, the one who is always using greases and lards to deep fry things you didn’t know could be deep fried, the one that measures butter and mayonnaise by the mouthfuls. The one you only watch in hopes that today will be the day she snaps and pan-sears her Mexican gardener and serves him with some Crisco grits and Uncle Bob’s Apple Cake.
Following her announcement that she has developed type-2 diabetes, she began promoting eating smaller portions, exercising, and Victoza, the drug she’s been taking to help manage her diabetes. In fact, she has been doing a lot of promotion for their product. Her website links directly to http://www.diabetesinanewlight.com/ which clearly shows that she is their new spokesperson. 
Rival Anthony Bourdain tweeted the comment, “Thinking of getting into the leg-breaking business, so I can profitably sell crutches later,” to mock her for the fact that she has been promoting unhealthy foods to give people diabetes for years, and now she’s profiting from the treatment of the illnesses she caused. Rumors circulated that he had called her a diabetic scam artist, but he insisted he never used those words. So we will. Paula Deen is a diabetic scam artist. Funds are being collected to buy Deen’s foot when she has to have one amputated. It will be bronzed and mounted atop a trophy to be presented to Anthony Bourdain after he beats her in a footrace.
To pour a few heaping tablespoons of salt in the wound, she was seen eating a cheeseburger and fries while on her annual Party-at-Sea cruise aboard a Celebrity Cruise liner, demonstrating that she cannot be the one to help set an example for other diabetics. If the rest of the overweight Southern women in my life are anything to go by, her idea of exercise will consist of buying some $4,500 home gyms which she will get excited over for a full 3 minutes, then will use as expensive masturbation aids until she hangs so many clothes on them that she can no longer find a spot upon which to grind her oily mound. Then it’s back to the kitchen. Diabetes is a death sentence for someone like her and we may be eager to see it punctuated. 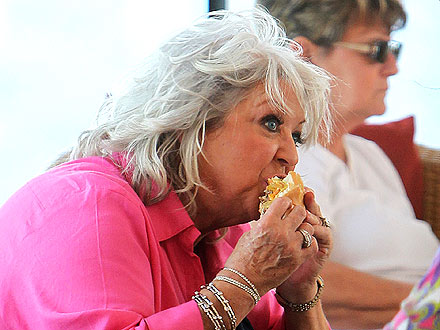 In Burbank, California, police responded to a call at a local McDonald’s. A homeless woman, 31 year old Khadijah Baseer, had been opening the drive-thru customer’s car doors and offering them blow jobs in exchange for Chicken McNuggets. Baseer was arrested, cited with misdemeanor solicitation and released. Speculators have surmised that the phrase “special sauce comes included” needed to be worked into this paragraph.

It's important for children to learn that too much of a good thing can be bad.  And too much of a bad thing can be disastrous.  A UK girl was rushed to the hospital earlier this week after she collapsed and had trouble breathing. What she confessed astounded medical professionals and everyone else with a pallet. She has eaten almost nothing but chicken nuggets in 15 years, since she was 2 years old. She claims she has never eaten a fruit or vegetable, unless you consider french fries a vegetable. Doctors found swollen veins in her tongue, diagnosed her with anemia and clipped the tail feathers she had begun to sprout. Even after being told by doctors that this diet is killing her she still refuses to eat anything else.  When questioned, her only response was, "BAKAAAW!"

Republican Senator Ralph Shortey introduced Senate Bill 1418 to the state of Oklahoma on January 19th. The bill states, “No person or entity shall manufacture or knowingly sell food or any other product intended for human consumption which contains aborted human fetuses in the ingredients or which used aborted human fetuses in the research or development of any of the ingredients.” This bill comes in response to a few new products that have hit the shelves but especially to Gerber’s new Healthy Jump Start variety of foods in which ground fetuses and plenty of stem cells are guaranteed in every jar. A Gerber’s spokesperson said in a statement, “Babies need stem cells, they need more of the ingredients that make up their bodies. Our Healthy Jump Start baby foods are the best way for them to get those. Anyone that wouldn’t want that for their kid is not only a bad parent, but I daresay, a communist.” If this bill passes, Gerber, Tyson, SYSCO, Coors, and Bridgestone are all prepared to suspend operations within the state.
Labels: Gonzo Who humor