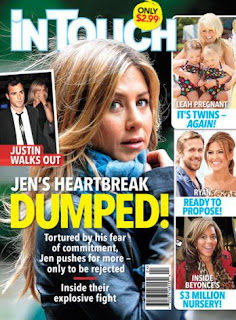 In Touch Weekly reported recently that Jennifer Anniston's Heartbreak had been dumped.  It's true.  The Mugwump Corporation can verify this.  Because we were there.  And knowing is half the battle.  Or beetle. Beetles?  Where?  I hate those little fuckers.

It's not like she was exactly disappointed when three men in Mickey Mouse costumes showed up at her door and demanded custody of the Heartbreak.  Jen's Heartbreak used to come inside after playing in the mud and get his dirty sneakers all over her pretty new couch.  He would walk around her house, burping and farting, calling her names like "clap ass" and "barking breath".  Jen wanted nothing to do with her Heartbreak, and was more than happy to hand him over to the costumed gentlemen.  Her request to "castrate the fucker" wasn't honored.

A short boat ride later and Jen's Heartbreak, dressed in leather straps, mask, and thong, was shot twenty-three times and dumped into the ocean.  We'd like to say that the Heartbreak will be missed.  But we won't. Fuck that guy.  What an asshole.