If Elected, Newt Gingrich will Eat the Moon 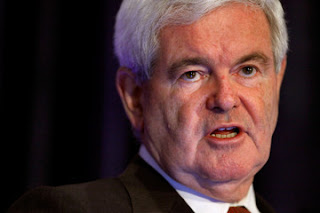 Newt Gingrich, a fan and supporter of both free-market capitalism and space travel, announced last week that if he's elected President of 'Da Fuckin' A, he's going to start a program that will get this country back to the moon.  Because, you know, why the fuck not.  Here's a few of his remarks:

"They have a saying in Texas: 'Sometimes you slap the zebra; sometimes the zebra slaps you.'  Would I lie to you good people?  I'm an honest guy.  An honest fella.  A dapper looking fella.  Now, I swear to you on the turtleneck of Mr. Jesus von Pantaloons that if you elect me Perez Hilton or whatever, my first priority will be to establish a permanent base on the moon.  Because if something is worth doing once, it logically follows that it's worth doing again and again even if there seems to be no goddamn reason why.  A great man once said that he was going to punch his wife so hard she went to the moon.  I think it's sad, and really speaks to a lack of faith on his part, that he was never able to accomplish this.  However, I have heard on one occasion or another that the American peeps want to send me to the moon.  I'm cool with dat.  Because I would personally like to hunt down and kill our zebra overlords, who, of course, live underneath the moon.  Folks, these are trying times.  What we need right now is a Prez that ain't not afraid to be shot to the moon so that he can personally take care of the zebra menace.  Would Commie Obama do that?  Right.  So if I'm elected Prison Addict of the United States of Castration, I'll go to the moon with nothing but my pink space suit, a shovel, and my Spongebob beach pail, and I will dig a hole underneath the moon so big that our zebra overlords will have nowhere to hide.  The American people deserve nothing less.  Or anything more.  Or anything at all, really.  Gingrich out, yo."

In other news, we're all fucked.
Labels: Dispatches from Planet Mugwump humor satire