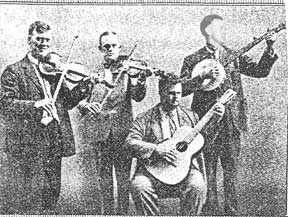 Ever done something like this?  I mean, it's late at night and you're driving alone and there's only a few people on the highway and you put some music on and all of a sudden you get totally creeped out and become horribly self-aware?  Like, you realize your own naked existence and that you might as well have one foot in the grave already and you'll never get your youth back and you feel so disconnected from everything?  And what is that?  Is something watching you from the back seat?  But you were alone!

This kind of thing has happened to me a lot, very often after having watched a movie in the theater.  Last Saturday, after watching The Rum Diary (kickass!) I started driving home and it felt weird that I didn't have this creepy feeling.  I was really somehow totally at ease.  Something was amiss, here.  So I tried to manufacture the self-awareness, the creepy crisis.  I put a collection of Skillet Lickers songs on and turned the music up and waited.

The Skillet Lickers are a Depression-era old-time Appalachian string band.  Up tempo tunes, mostly, but still, you're listening to mono recordings of long dead and slightly racist hillbillies.  Still, it took a lot of hard concentration before I was able to imagine some sort of ghoulish presence in my car.  But still, it only sort of came and went.

So I turned the game up a notch.  I started thinking about how I was probably the only person in the world listening to the Skillet Lickers at that particular moment in Weird Time.  Not a lot of people listen to music this old and what were the chances that someone else was listening to this particular band at this exact moment.  Right?  So that meant that the ghosts would be really in tune with my vibes, right?  I was isolated, I was in their view.  Well, that makes as much sense as anything else, I suppose.

Thinking like that finally seemed to push me over the edge.  I was creeped out but had not yet manufactured an existential freakout, not totally.  More experiments to follow?  Yes, let's hope so.

Unknown said…
Thanks Pat for this sharing experience you had I just wish yo provided a link to the music you write about, anyway thanks again
November 11, 2011 at 11:18 AM