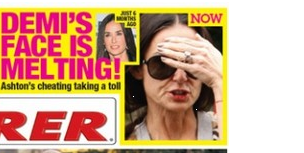 and I believe it too.  I once had a terrible face melt experience myself and was forced to find the great Bongolian witch doctor, Bongo T. Willowtree, who has performed un-face melting spells for over fifty trillion years.

Everyone knows, of course, that face melt is caused by a breed of human known as AssholeCameraPeeps.  AssholeCameraPeeps use their cameras to steal the souls of others so that they might feed on them.  Psychic Vampires, as the Great Burroughs once said.

Try not to confuse AssholeCameraPeeps with their mostly benevolent cousins, ArtCameraFolks.  ArtCameraFolks are generally a quiet and gentle bunch, friendly even, if offered snacks or a funny anecdote.     Rather than stealing your soul, ArtCameraPeeps actually preserve it, passing your essence down through the generations.  ArtCameraFolks should be treated as friends.

You might first sense an AssholeCameraPeep is nearby when you notice that you're surrounded on all sides by the noxious odor of bat shit.  Next, you'll hear them reciting nursery rhymes from their youth, so as to preserve at least the most faint connection to an innocence they've long since abandoned.  They've looked into the abyss for so long that their sanity has been whittled down to nearly nothing.

If you see an AssholeCameraPeep you should run fast, skedaddle, get the fuck out of there.  Common strategies for avoiding an AssholeCameraPeep include jet pack, flare gun, and an invisibility shield.  Above all, at the soonest opportunity, alert the celestial authorities and the karma police.