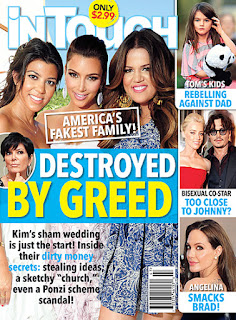 What the hell is this?  I can tell you what it looks like, at least to this blue-eyed horse fucker: Someone at In Touch Weekly, or perhaps even the entire magazine, has gone rogue, exposing the tabloid industry's darkest secret.  I mean, what?  "America's Fakest Family?"  What are they thinking?  Do they want everyone to know that the Kardashians, along with hundreds of other celebrities are merely synthetic Robotoids?  And what does this leak even mean?  That we're getting closer to the Great Cosmic Freakout predicted by Marvin Mervin of the Mugwump Corporation upon its founding in 23498534 B.C.?  Well, let's hope so, or else this information is moot anyway.

Even more interesting is the even larger text below: "Destroyed by Greed." Well, yes, but who else would destroy them?  Every Celebrity Robotoid conspiracy theorist knows that Dr. Thurburt Cecil Greed III has oversee the Robotoid production and destruction facilities deep inside the Antarctic since 1969., having succeeded both his father and grandfather in overseeing the entire operation since 'ol "Granpaps" built the first Charlie Chaplin Robotoid, thus jumpstarting in earnest the Tabloid Syndicate, which, as we all know, the controls the Kardashians as well as all other Celebrity Robotoids.  Of course Greed had to destroy them.  I mean, we all know they've been working on a self-aging Robotoid for the better part of a half-century, but, alas, to no avail.  Until that day comes, they still have to replace them periodically, to give the illusion of aging, or, more recently, of plastic surgery gone horribly awry.  It's what sells papers, folks.

I can only conclude that there's a scoundrel afoot.  Long live the rouges!  Long live irrationalization!